What Ever Happened to the M1 Abrams Tank Super Bullet? 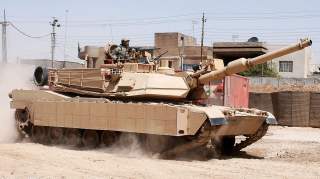 Key point: The STAFF round may yet be produced, but they are costly and modern defenses may stop them.

In the 1990s, the U.S. Army was developing a new series of tank ammunition for the Abrams main battle tanks. The new round, designated XM943 Smart Target Activated Fire and Forget (STAFF), was to have lethality far beyond what was possible with conventional ammunition: it would fly over enemy tanks and detonate above them, projecting an explosively formed projectile through the top armor to destroy them.

Some reports suggest that the round could have an astounding 11.5:1 kill ratio against an enemy armor force.

Information for this article was taken from Tomorrow’s Smart Tank Munitions in Armor, March-April 1995 and The Future Combat System (FCS): Technology Evolution Review and Feasibility Assessment in Armor, September-October 1997. This first appeared in October 2018.