What Happened the Last Time the U.S. Air Force Ran Out of Money? 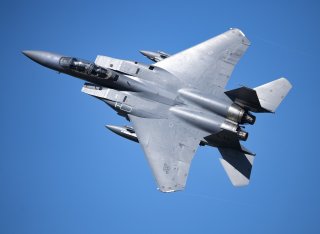 The U.S. Air Force was feeling budgetary pressure even before the novel-coronavirus pandemic swept the planet starting in December 2019.

With budgets flattening, and likely to shrink as a global recession takes hold, it’s worth recalling what happened the last time the Air Force suddenly had less money to spend.

In 2012, automatic budget sequestration cut deeply into the Air Force’s training and operations budgets. The service’s Air Combat Command got just $3.1 billion—three-quarters of what it needed to fully train the thousands of pilots flying the command’s 1,600 F-15, F-16 and F-22 fighters, A-10 attack jets and B-1 bombers.

So the command did something radical. It stripped certain airplanes of many of their missions, thus cutting back on the number of flight hours a particular pilot needed to be officially war-ready. Air-to-air dogfighting and low-altitude maneuvering suddenly became much rarer skills.

Perhaps most interestingly, the command essentially barred F-16s—at a thousand strong, then and now America’s most numerous fighter—from engaging any enemy jet newer than a 1970s-vintage MiG-23.

Hoffman asked Hostage whether, in light of sequestration cuts, the Air Force could finally dispose of its obsolete LANTIRN infrared navigation pods and free up the related maintenance funds.

“From this initial question, a broader question emerged,” Air Combat Command recalled in its official history for 2012, a heavily-redacted copy of which journalists obtained through the Freedom of Information Act.

Johns and Lyon joined the conversation. Johns wanted to retire other aging hardware to save money. Lyon’s idea was to eliminate training.

Lyon proceeded to ask the generals in charge of numbered air forces—each of which usually includes several wings and potentially hundreds of planes—which “systems, skills and tactics” they thought were no longer important. “For example, low-altitude weapon-delivery or low-level navigation.”

“How good do B-1 aircrews need to be at running around in formation at low altitude?” ACC vice commander Gen. William Rew asked. “They can do it, it’s challenging and it’s hard to do well. But it may not be tactically relevant.”

Based on the feedback, Air Combat Command narrowed the missions it assigned to many planes—and by extension the flying hours pilots spend preparing for those missions.

When it all shook out, Air Combat Command’s roughly 60 B-1 bombers mostly stopped flying low-level attacks—and the command’s hundreds of F-16s gave up a lot of their dogfighting responsibilities.

The idea of changing missions to reduce training and thus save money had a precedent in Air Combat Command, the official history explained. Starting in 2011, Rew advocated reducing close-air-support training for pilots of the newish Block 50 F-16.

In Iraq and Afghanistan, Air Force fighters and bombers were spending most of their time flying slow circles at medium altitude, scanning for insurgents and bombing them with the help of controllers on the ground.

Rew, himself a former Block 50 pilot, explained that his version of the F-16 was wasted on this kind of close air support. The “Wild Weasel” Block 50s specialize in locating enemy air defenses with radar-detecting sensor pods—then destroying them with special radar-homing missiles.

“Pilots could not train to be good at everything,” the history pointed out. And since no other planes could handle the Wild Weasel mission, the Block 50 crews should spend less time prepping for low-intensity close air support and more time training to escort U.S. planes through heavily-defended enemy territory, Rew argued.

Especially since, after Iraq and Afghanistan, the Air Force could probably expect to face more dangerous foes.

Now, the Block 50 F-16s’ mission shift—away from close air support and toward defense-suppression—also demanded their pilots spend at least some time training for air-to-air dogfighting. “The Block 50 F-16 and its pilots were unique in their capacity to serve as a dual-role escort over enemy territory in defense against ground-based and airborne threats,” the history explained.

But the brass only wanted the 1990s-vintage Block 50s tangling with “second- and third-generation adversaries”—meaning 50-year-old MiG-21 designs and MiG-23s from 1970s, respectively. Apparently, more modern MiG-29s and Su-27s were too dangerous for the Block 50s, if the American planes’ pilots were mostly focusing their training on attacking defenses on the ground.

Instead, ACC’s F-15Cs and F-22s would fly ahead to fight the MiG-29s and Su-27s. Based on that assumption, the generals also dialed back air-to-air training for F-15E fighter-bombers and older Block 30 and Block 40 F-16s.

“This particular effort did not seek to eliminate air-to-air training altogether,” the history noted. “Rather, the initiative strove for the proper mix of air-to-air and air-to-ground training.”

Meanwhile, the ACC brass consigned the B-1s to high altitude, reducing the need to train the bombers’ crews for risky low-level flying.

Look for more mission-shifts in 2020 and 2021 as money again becomes scarce.