What Happens Now That President Trump Has Invoked the Defense Production Act? 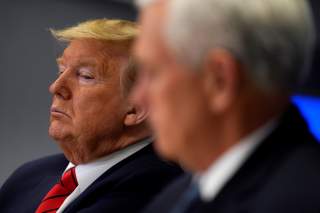 There are many ways and resources the US military can mobilize to support the national emergency efforts stemming from the novel coronavirus pandemic. Most of these actions will be in support of other federal agencies with the expertise, jurisdiction, and authorities to respond on the frontlines of our communities.

While the Navy’s hospital ships and mobilized National Guard troops are the most visible efforts currently underway to fight COVID-19, many more are taking place across the country.

From sharing protective equipment like respirator masks and deployable ventilators — to virus testing laboratories — to specialized vaccine research, the Defense Department is a partner in protecting and helping the nation during disasters and emergencies alike.

This week, the president invoked the Defense Production Act (DPA) primarily to speed up domestic manufacturing of medical supplies and personal protective equipment needed to combat the virus. But it is quite possible many more of its broad authorities could be invoked the longer this emergency persists.

As former AEI colleague Bill Greenwalt said, “the civilian economy is and will continue to be important to [the Department of Defense] as a source of surge production and raw material inputs. The authorities of the Defense Production Act of 1950 are designed to allocate and ensure domestic sources of supply for defense purposes.”

The very term national defense has grown and expanded over time. The DPA authorities, according to the Congressional Research Service (CRS), may also be used “to enhance and support domestic preparedness, response, and recovery from natural hazards, terrorist attacks, and other national emergencies.”

This broad definition allows for military and energy production/construction programs to be covered under the law’s jurisdiction, along with stockpiling, space, and critical infrastructure protection and restoration (such as water or utilities).

While the legislation is lengthy and has been revised many times, the gist of it is this:

Some DPA authorities have gone unused for decades — such as various loans. Still others are used with regularity.

Prioritizing contracts, for example, is nothing new to the Pentagon — or even other federal agencies, according to CRS. During the Iraq war, the ability to prioritize contracts was used to speed up production of mine-resistant vehicles. It has also been employed in the past for the construction of Air Force One, along with the B-2 bomber and a missile defense system.

So, too, has the FBI used this authority in support of its Terrorist Screening Center program. FEMA employed it during the 2017 hurricane season to build temporary housing units, procure bottled water, and for the restoration of electricity in Puerto Rico. The Energy Department similarly invoked this prioritization to “ensure that emergency supplies of natural gas continued to flow to California utilities, helping to avoid threatened electrical blackouts in early 2001.”

While this industrial, technological, and services mobilization can be used quickly and for so much good, there is a reason this changing and waiving of the rules is limited to disasters and emergencies such as COVID-19. If the defense production act is invoked and a contract is executed, the contractor is essentially not liable for compliance with federal rules and regulations. This is true even if it is found to be illegal later.

Further, the Defense Production Act is vast in its reach. Equipment such as gowns and specialized masks are obvious as needing to be included. Same with the provision of essential services, such as specialty medicine. But the ability to invoke DPA coverage with respect to certain technologies and the tech sector more broadly could come as a shock to those industry leaders. Silicon Valley and their government partners will need to tread carefully as much of this could be unchartered territory.

While the Defense Production Act is invoked by the president, Congress will want to pay close attention to its usage in the coming months to ensure the spirit of the statute is upheld to ensure the Defense Department and industry can be full and responsible partners in helping the nation to combat this pandemic.

This article by Mackenzie Eaglen first appeared at the American Enterprise Institute.