What Happens When U.S. Soldiers are Exposed to Small, Repeat Explosions? 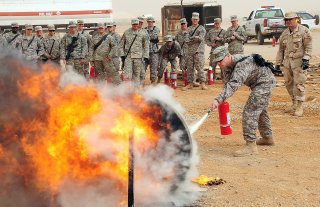 It is no secret that soldiers face danger from explosions. When a shell or bomb explodes, soldiers suffer concussive effects: when a salvo of Iranian ballistic missiles struck a U.S. base in Iraq in February 2020, more than 100 American soldiers suffered concussive brain trauma.

But what happens when U.S. soldiers are exposed to small but repeated explosions, including when they fire shoulder-mounted rocket launchers?

The answer is that we don’t really know, according to a new report by the RAND Corporation. RAND experts studied previous research into the effects of repeated exposure to military occupational blast, or MOB.

“We defined military occupational blast (MOB) as repeated, low-level blast exposures that do not result in a concussion,” RAND researcher Charles Engel told the National Interest. “MOB is therefore ‘subconcussive.’ A service member would likely notice the exposure. However, they may not think of MOB as a potential health hazard.”

“Research to date has focused on blunt force head trauma and/or blast exposure resulting in concussion: i.e., loss of consciousness less than twenty minutes or alterations of consciousness such as ‘seeing stars’ or having one’s ‘bell rung,’” Engels added.

The study of how explosions affect soldiers is nothing new, especially since massed use of artillery in World War I. But research has tended to focus on the effects of larger blasts.

“A full understanding of the potential short- and long-term outcomes of low-level MOB is challenging because there has been little research on this topic to date, and the research that does exist does not present a clear picture of the issue,” the study found. “Most research on the issue of blast-related brain injury is generally concerned with a magnitude of blast exposure that is stronger than low-level MOB exposure.

RAND scientists could not even specify how many blasts equals “repeated” exposure, nor what level of psi constitutes a low-level blast. But blast pressures of 100 psi are considered fatal to humans, and there have been animal studies on the effects of blasts under 20 psi.

In addition, the U.S. Marine Corps has conducted some research into blast effects on those who use explosives to breach walls, while the Swedish military has studied the effects of firing shoulder-mounted rocket launchers (which led the Swedes to limit the number of times a soldier could fire them).

“One study found microhemorrhages in the brains and meninges of rats and pigs after experimental exposure to shoulder-mounted artillery weapon- and howitzer launcher-generated blast overpressure,” RAND noted. Still, “there are no identified guidelines or models from which to determine what constitutes a safe level of repeated MOB exposure for the low levels often incurred in training or analogous settings.”

One interesting question is whether the low-level blast effects are being mistaken for PTSD. “In general, we did not find persistent health effects in humans that could be attributed to MOB,” Engels told the National Interest. “Past research has found a strong correlation between concussive blast-exposure and subsequent PTSD. There have been debates about which of the two injury types, PTSD or concussion, is responsible for later health effects. We describe evidence from animal studies to suggest a more complicated explanation: concussive blast exposure may shut down input from brain pathways that normally help to reduce situational fear, rendering a person more vulnerable to PTSD-like symptoms (e.g., nightmares, exaggerated response to fear producing circumstances).”

As for protective gear against low-level blast, soldiers can wear helmets, body armor and earplugs. But these aren’t necessarily designed with small blasts in mind. “Helmets (e.g., Advanced Combat Helmet), are typically designed to protect the wearer from head trauma due to projectiles rather than blast exposure and may sometimes even amplify blast exposure,” the study noted. “Earplugs are the most effective barrier protection from hearing-related blast exposure injury. The limited research on non-barrier prevention methods suggest that education programs may increase the use of hearing protection.”

What’s interesting here is the evidence that soldiers suffer from blast even when they are not direct victims of shell or bomb explosions. Just as aircraft mechanics can develop hearing loss from constant exposure to jet engines, it appears that “routine” combat tasks—such as firing a rocket launcher—can affect the nervous system of those exposed to the blast.