What Hiroshima Can Teach Donald Trump and Kim Jong-un 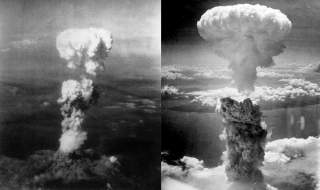 It has been 73 years since an atomic bomb destroyed Hiroshima, and have Donald Trump and Kim Jong-un learned anything?

When a U.S. president threatens to rain "fire and fury" on North Korea, the unspoken menace is of atomic hellfire. When the Dear Leader of North Korea says the nuclear launch button is "always on my table," he signals that the next Korean War will be announced by mushroom clouds.

There have been statesmen, such as Churchill and Truman, that have studied and learned from history. Trump and Kim are not among them. And that's dangerous, because nuclear war is the last thing that we want to learn about through practical experience.

So what can Hiroshima teach Trump and Kim?

First, nuclear weapons are not theoretical. Many of today's conventional weapons, from stealth fighters to hypersonic missiles, are unknown quantities. For the most part, we don't know how they will perform in combat. But we have two well-documented examples of what happens when nuclear weapons explode over a city. The bombs that leveled Hiroshima and Nagasaki only had a force of 15 to 20 kilotons, less than the 120 kilotons of a 2017 North Korean nuclear test, and not even one-fiftieth of the 1.2-megaton yield of a modern U.S. B83 warhead. Should there be any nuclear explosions on the Korean peninsula (not to mention Japan or the West Coast of the United States), the effects would be horrific. Neither Trump nor Kim will have the right to claim they didn't know the consequences of their decisions.

Hiroshima can also teach the consequences of misperception. The jury of history will never reach a verdict on whether the U.S. was justified in dropping two atomic bombs on Japan. There will always be arguments over whether Japan would have surrendered anyway if the bombs had not been dropped. But what does seem clear is that America and Japan misunderstood signals from each other, didn't understand their opponent's psychology and domestic politics, and therefore couldn't make optimum decisions. The result was 300,000 victims and two seared patches of earth.

Perhaps the Bomb needed to have been used against Japan, and -- heaven forbid -- perhaps it will need to be used in a Second Korean War. But to use nuclear weapons for the wrong reasons -- because one leader needs to be perceived as tough, or another believes that nuclear weapons will save his regime from invasion or collapse -- would be a mistake of the highest magnitude. If the Bomb is be dropped for the first time in nearly a century, the decision should be made with a clear assessment of the enemy, and a firm grasp of the goals to be achieved.

Finally, Hiroshima should teach Trump and Kim that even if history does not always reach a verdict, it always conducts a trial. One reason that nuclear weapons were never used in the Cold War was that no one in the White House or Kremlin wanted to be remembered as the leader who started World War Three. Even today, it is noteworthy that while Americans mark some World War II anniversaries -- D-Day, V-E Day, V-J Day -- there is no celebration of bombing Hiroshima and Nagasaki.

If Trump or Kim choose to use nuclear weapons -- for good reasons or bad -- they will not be remembered kindly.