What If All Future American Warships Looked Like the Stealthy Zumwalt? 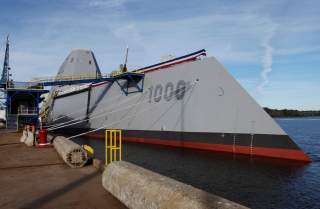 Key point: The Navy is thinking about what it needs for the next big war. Among the technologies being considered are making more of its ships stealthy.

David Axe serves as Defense Editor of the National Interest. He is the author of the graphic novels  War Fix,War Is Boring and Machete Squad. This first appeared in 2019.