What If the Powerful Navy SEALs Got a Specialized Submarine? 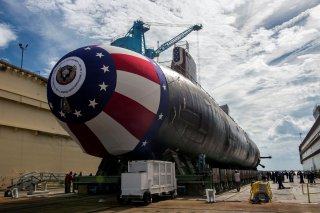 Key point: The SEALs are among the best. Would a special submarine make them better?

The U.S. Navy is hard at work developing new underwater transports for its elite commandos. The SEALs expect the new craft—and improvements to large submarine “motherships” that will carry them—to be ready by the end of the decade.

SEALs have ridden in small submersibles to sneak into hostile territory for decades. For instance, the special operators reportedly used the vehicles to slip into Somalia and spy on terrorists in 2003.

Now the sailing branch is looking to buy two new kinds of mini-subs. While details are understandably scarce, the main difference between the two concepts appears to be the maximum range.

The other sub, called the Dry Combat Submersible, will carry six individuals much farther and at greater depths. The most recent DCS prototype weighs almost 40,000 pounds and can travel up to 60 nautical miles while 190 feet below the waves.

Commandos could get further into enemy territory or start out a safer distance away with this new vehicle. SEALs could also use this added range to escape any potential pursuers.

Both new miniature craft will also be fully enclosed. The current SDVs are open to water and the passengers must wear full scuba gear—seen in the picture above.

In addition, the DCS appears to pick up where a previous craft, called the Advanced SEAL Delivery System, left off. The Pentagon canceled that project in 2006 because of significant cost overruns.

But the Navy continued experimenting with the sole ASDS prototype for two more years. The whole effort finally came to a halt when the mini-sub was destroyed in an accidental fire.

Special Operations Command hopes to have the SWCS ready to go by 2017. SOCOM’s plan is to get the DCS in service by the end of the following year.

SOCOM and the sailing branch also want bigger submarines to carry these new mini-subs closer to their targets. For decades now, attack and missile submarines have worked as motherships for the SEALs.

Eight Ohio– and Virginia-class subs currently are set up to carry the special Dry-Deck Shelter used to launch SDVs, according to a presentation at the Special Operations Forces Industry Conference in May.

The DDS units protect the specialized mini-subs inside an enclosed space. Individual divers also can come and go from the DDS airlocks.

The first-in-class USS Ohio—and her sisters Michigan, Florida and Georgia—carried ballistic missiles with nuclear warheads during the Cold War. The Navy had expected to retire the decades-old ships, but instead spent billions of dollars modifying them for new roles. Today they carry Tomahawk cruise missiles and SEALs.

The Virginias—Hawaii, Mississippi, New Hampshire, North Carolina and the future North Dakota—are newer. The Navy designed these attack submarines from the keel up to perform a variety of missions.

SOCOM projects that nine submersible motherships—including North Carolina as a backup—will be available by the end of the year.

The Navy has a pool of six shelters to share between the subs. SOCOM expects the DDS to still be in service in 2050.

But prototype DCS mini-subs cannot fit inside the current shelter design. As a result, a modernization program will stretch the DDS units by 50 inches, according to SOCOM’s briefing.

The project will also try to make it easier to launch undersea vehicles and get them back into the confines of the metal enclosure. Right now, divers must manually open and close the outside hatch to get the SDVs out.

Crews then have to drive the craft back into the shelter without any extra help at the end of a mission—underwater and likely in near-total darkness. The sailing branch wants to automate this process.

With any luck, the SEALs will have their new undersea chariots and the motherships to carry them ready before 2020.