What If the United States Had Stayed Out of World War I? 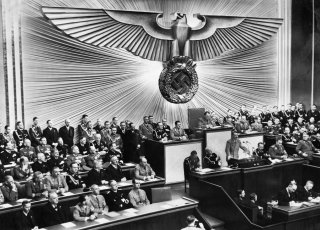 The First World War was supposed to be the war to end all wars. Instead, the Treaty of Versailles, which formally ended the war, helped give birth to Nazism in Germany, ensured the victory of communism in Russia, and led to another world war that cost the lives of nearly four times more people than the first, including over six million Jews. At the time the Treaty of Versailles was signed in June 1919, British prime minister Lloyd George despaired that its harshness and injustices toward the defeated Germans would lead to a future war worse than the last within twenty-five years. Germany had surrendered to the Allies on the basis of President Woodrow Wilson’s Fourteen Points, but the final treaty excluded seven of those that were favorable to Germany.

As late as January 1917, President Woodrow Wilson had called for “a peace without victors,” which is exactly what Europe so desperately needed to prevent the outbreak of the Second World War. However, that same month, German emperor Kaiser Wilhelm II met with his top military commanders. He was told that if Germany were to engage in unrestricted submarine warfare, America would likely declare war on Germany, but they could likely starve Britain within six months before the Americans could send large numbers of troops to the Western Front. The Kaiser decided to take a risky gamble on the future of the Reich by approving the plan, and German foreign minister Arthur Zimmerman doubled down on the Kaiser’s fateful decision with an offer of German support to Mexico in reclaiming lost territory if the United States declared war on Germany. Ultimately, it was the revelation of this Zimmerman Telegram that pushed Congress to declare war on Germany less than three months later.

Many authors have speculated that it was America’s entry into the First World War that prevented a negotiated peace, which would likely have been far more just and lasting than what the Treaty of Versailles ended up creating. In an essay published in 1991, David Stevenson concluded: “When the Americans declared war on Germany, Britain had the wherewithal to finance only three weeks' further purchases in the USA. Without American entry, economic paralysis, coupled with the February revolution, would probably have driven the allies into, at best, an unfavorable compromise.” France had also exhausted its ability to pay for American goods by April 1917. But what if the Kaiser had followed the advice of German chancellor Theobald von Bethmann-Hollweg not to implement unrestricted submarine warfare and the United States had remained neutral, creating the conditions for the signing of an armistice in the fall of 1917 and the negotiation of a treaty that was acceptable to all of the great powers? Had the Germans not provoked the United States to war with its unrestricted submarine warfare campaign and the infamous Zimmermann Telegram, German leaders could have appealed to President Woodrow Wilson to mediate a negotiated peace settlement that was fair to both sides and capable of ensuring future peace in Europe.

The French Army mutinied in the spring of 1917 after the failure of the Neville Offensive, causing them to refuse to engage in any more offensives for the rest of the year. Meanwhile, a British offensive at Ypres in Flanders resulted in 325,000 Allied casualties, with Allied armies advancing only five miles. Thus, the optimal time for both sides to have agreed to an armistice, due to the fact that all of the great powers were exhausted, would have likely been around mid-September 1917, by which time it seemed that the war had reached a stalemate. That same month, the Kaiser authorized a peace offer to be sent to Great Britain that offered a full German military withdrawal in the west and the restoration of Belgian independence. The British prime minister reportedly wanted to accept the offer. However, he was overruled by his War Cabinet, which believed Britain could obtain better terms from Germany once millions of U.S. reinforcements arrived on the Western Front. Without hope of U.S. military intervention, the German offer might well have been accepted with certain modifications to satisfy Britain’s French and Italian allies.

Rather than an armistice calling for the Allied occupation of the Rhineland and bridgeheads on the left bank of the Rhine, as was the case in actual history, German forces would have continued to occupy the Belgian and French territory they had conquered until a final peace treaty was signed, thus enabling Germany to negotiate from a position of equal strength with the Allies, particularly in view of the imminent surrender of Russia. As a condition of the armistice, Germany would offer to end submarine warfare against the Allies in return for the partial lifting of the British-led starvation blockade, allowing neutral powers, including American ships, to sell foodstuffs to the Central Powers. The warring parties would agree that the final peace treaty would be signed by Christmas 1917, permitting the withdrawal of troops from occupied territories to their new national boundary lines.

The specific terms of the final peace settlement, many of which are based on past peace offers and which incorporate elements of all of Wilson’s Fourteen Points (but those relating to the withdrawal of all German troops from Russia and the reduction of national armaments of all of the warring powers), might have included the following provisions:

The Central Powers would withdraw all troops from France, Belgium, Serbia, Poland, Romania, and Greece. Germany would fully restore and guarantee Belgian independence and ensure that all French industrial areas and mines remained intact, doing no damage to Belgian or French property during its troop withdrawal. Germany would return all of Alsace-Lorraine except for the Luxembourgish-speaking region of Thionville, which would be annexed by Luxembourg. Germany would recognize its new border with France as permanent in exchange for the Grand Duchy of Luxembourg—with the Grand Duke remaining as its head of state—joining the German Confederation. The rest of Alsace-Lorraine would become a self-governing French autonomous region.

In exchange for the return of over 90 percent of Alsace-Lorraine, France would transfer control of French Indochina and French Morocco to Germany. All German colonies, except those occupied by the Japanese Empire, would be returned to Germany, along with all captured German merchant vessels. Germany would offer to scrap or transfer to other countries twenty-five of its surviving forty-five surviving battleships, representing a reduction of 55 percent in its total number of battleships, with two of its retired battlecruisers eligible for conversion to aircraft carriers. Germany would also sign a naval disarmament treaty with Britain that permanently limited its capital ship tonnage to no more than 50 percent of the Royal Navy and reduced the size of its U-boat fleet by nearly two-thirds.

Austria-Hungary would cede Trentino and Trieste to Italy, whose control of the Dodecanese Islands would be internationally recognized, while maintaining control of most of the Istrian peninsula, including the ports of Pula and Fiume. Albania would become an Italian client state rather than a protectorate. Austria would have to adopt the trialist proposal and replace the Dual Monarchy with a Triple Monarchy of Austria-Hungary-Croatia, giving the Slavs their own kingdom within the empire. Poland would annex the Austrian province of West Galicia, with its eastern borders along the same Curzon Line outlined in the actual Treaty of Versailles, including Chelm but not Lemberg. Poland would also be guaranteed access to the sea through an international railway between Warsaw and Danzig, with its independence guaranteed by all signatories to the treaty.

The Ottoman Empire would have to withdraw its troops from and grant independence to Palestine, Transjordan, the Hejaz (western Arabia), and Hasa (south of modern-day Iraq). Moreover, it would be required to grant greater autonomy to the Arabs of modern-day Syria, Lebanon, and Iraq and guarantee the safety of Armenian Christians, allowing their safe relocation to Armenia. Serbia would be given access to the sea through a union with Montenegro. An internationally supervised plebiscite would be held in Vardar Macedonia, which was 81 percent Bulgarian, to determine whether its inhabitants wished to remain part of Serbia or unite with Bulgaria. Southern Dobruja, which was 47 percent ethnic Bulgarian and only 2 percent Romanian, would be returned by Romania to Bulgaria. Romania would annex the Russian province of Bessarabia as compensation for this loss.

All of the great powers would join together in supporting the establishment of the League of Nations. Friendly trade relations between the warring powers would immediately be resumed in order to ensure a more rapid economic recovery for the war-torn nations of Europe. The great power blocs that contributed to the outbreak of the war would be dissolved and banned by treaty. A five-power Concert of Europe—consisting of Britain, France, Germany, Italy, and Austria-Hungary-Croatia—would be re-organized to negotiate all future international disputes through peaceful diplomatic means. No reparations would be owed or paid by any nation to any other. The British starvation blockade against the Central Powers would be lifted immediately after the treaty was signed. Germany would also agree not to annex any territory from Russia. Following the armistice between the Central Powers and Soviet Russia, this treaty would be modified to guarantee the independence of the newly created states of Finland, the Baltic Duchy (consisting of the modern-day states of Estonia and Latvia), Lithuania, Belarus, Ukraine, and the Transcaucasian Republic (consisting of the modern-day states of Georgia, Armenia, and Azerbaijan).