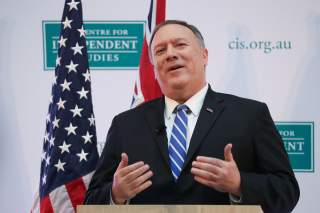 Nolan Peterson, The Daily Signal’s foreign correspondent, is back in Washington after a week traveling abroad with Secretary of State Mike Pompeo. Today, he joins Daniel in the studio to share about the trip and the news he reported on, ranging from Russia to China to North Korea and Afghanistan.

Daniel Davis: Joining me back in the studio is our foreign correspondent, Nolan Peterson, who is straight off of one week globetrotting with Secretary of State Mike Pompeo.

Nolan Peterson: I’m glad to be back.

Davis: So, just before we get started, where all did you go?

Peterson: It was quite the journey. We started off the long flight to Bangkok, spent several days there, and then on to Sydney, and then a hopscotch across the Pacific, stopping in the Federated States of Micronesia for Secretary Pompeo’s final visit of the journey.

Davis: It was [your] first time traveling with the secretary of state?

Peterson: It was, yeah. It was really impressive to see through the levers of U.S. power working abroad, and I think just to see the importance of the presence of the United States in these places, and the fact that we do carry a lot of sway around the world. And I would definitely argue against the notion that our power is somehow on the decline, based on what I saw this past week.

Davis: Well, your trip covered a whole … set of issues, so I want to ask you to go through those. Starting with Russia—you actually broke a story about the U.S. putting new sanctions on Russia for its use of a chemical weapon last year on British soil, targeting a former Russian spy and his daughter.

What’s the significance of those new sanctions?

Peterson: Well, I think, if you look at what happened last week, it was a pretty aggressive week [for] U.S. foreign policy.

I think when you look at the additional sanctions for the Skripal assassination attempt on U.K. soil by a nerve agent in conjunction with the U.S. decision to finally pull out of the [Intermediate-Range Nuclear Forces] Treaty, the medium-range missile treaty that was a carryover from the Cold War that the U.S. withdrew from last week.

You take all these things together, and I think there’s a pattern going on, too, more broadly with the U.S. slapping new … tariffs on China. The U.S. is really digging in its heels and saying that these countries are serial violators of America’s trust, aren’t going to get away with it any longer.

So, I think you’re seeing a more aggressive pushback in some ways by the Trump administration. It happened [with] these two things. The new sanctions for the nerve agent attack and the INF Treaty withdrawal happened concurrently.

So, I think that was a blow for Russia. But yeah, I think America seems to be really making a statement that it won’t be made a fool by these countries anymore.

Davis: So, President Trump’s decision to withdraw from the INF Treaty. This was a treaty struck at the end of the Reagan administration with [Soviet leader Mikhail] Gorbachev, really celebrated as something that [was] finally a breakthrough with the Soviet Union to reduce the missile stock holds.

Russia has not been abiding by this in recent years.

Davis: So, it makes sense for President Trump to say, “All right. Well, we’re not going to hold ourselves to this either.” But does this signal a deterioration of U.S.-Russia relations to the point where you might see a new nuclear buildup on either side?

Peterson: I don’t think it’s a deterioration. I think it’s just an acceptance of reality, right? I mean, Russia has been violating this treaty for years, and the U.S. was still abiding by it just for our posture, if you want to call it that.

I think that, finally, you just have to accept reality and saying that we are hobbling ourselves militarily by abiding by this treaty, which Russia was blatantly violating for quite a long time.

I think, also, you can’t overlook the fact that as the U.S. asserts itself as a Pacific power, and as we start to push back against China’s more aggressive military posture in the Pacific region, the ability for us to have these ground-based missiles is important in the Pacific.

So, China was never bound by the INF Treaty, and they have all sorts of missiles that operate within that prescribed range of the INF Treaty.

So, now that we’re unbound from those obligations, we have the capacity to deploy missiles in the Pacific region, which could offer a deterrent effect to China, and Defense Secretary Mark Esper floated that possibility on his trip to Sydney where he met, by the way, Secretary Pompeo there.

Davis: Yeah, your trip to Sydney—I want to ask about that because Pompeo was meeting with a major partner in the Pacific and … President Trump had just announced that new tariffs are coming on $300 billion of Chinese goods.

How are our partners in the Pacific responding to this?

Peterson: Well, I think when you look at Australia, their No. 1 trading partner is China. At the same time, Australia is getting, I think, more wary, and I wouldn’t necessarily say nervous, but concerned about China’s more aggressive military posture in the region.

So, in a way, Australia has come in a pickle, right? They’re dependent on China’s trade. At the same time, they are feeling the pressure of China: their territorial claims in the South China Sea, acts like this covert base in Cambodia, which got exposed recently. The fact that China and Russia just conducted a joint air patrol [over] the Sea of Japan.

So, I think all these things together make Australia nervous about the long-term military threat posed by China. At the same time, they don’t want to lose that trade by doing something provocative, which might damage their economy.

So, Secretary Pompeo’s visit to Australia really was to rally to Australians to our side to help push back against China. And in doing so, he made a point that the economic costs potentially of stepping away from China pale in comparison to the long-term costs if China is able to either manipulate Australia from within, through these information campaigns and electoral interference, which has happened recently, as well as China trying to position itself as a strategic threat throughout the Pacific.

Davis: Well, recently, when Pompeo was in the U.K., he was critical of the U.K.’s government policy toward China, specifically allowing Huawei to help to play a role in building its 5G network.

You noted in your story that Australia actually has drawn a hard line against China on this.

Peterson: Yeah, they really led the way on not allowing China’s 5G network in their country. Australia has called out China, too, for these subversive influence campaigns on its soil, electoral interference. So I think Australia is definitely our partner, and I think that was clear on the trip.

The rhetoric come from the Australian side. They’re clearly with America, but they also made clear that they have to balance their national interests, and that they don’t have, perhaps, the leeway that we do to push back really aggressively against China because our economy can weather the storm, and I’m not sure if theirs necessarily could.

I think, also, when I mentioned the INF Treaty withdrawal by the U.S, there’s some concern in Australia, too, about the possibility of the United States asking to put missiles on Australian soil.

That request has not been made, but Secretary Pompeo fielded … a few questions about the possibility of U.S. missiles on Australian soil during his trip.

So, I think there is some anxiety in Australia that they don’t want to get caught up in some sort of military escalatory tit-for-tat competition between the U.S. and China.

But I think they feel the pressure of China, and they understand that looking forward in this new era of strategic competition that you can’t just bury your head in the sand and wish this threat [was] going to go away because China’s behavior patterns clearly indicate that they are trying to establish their regional dominance.

Davis: Well, another big factor there in the region is North Korea, and in just the last few days, they’ve been launching numerous ballistic missile tests, and they were notably absent from the ASEAN diplomatic gathering in Bangkok, where you were with the secretary.

Are relations with North Korea deteriorating to a new level, or do you think this is just a typical periodic fit that North Korea throws to get our attention?

Peterson: I don’t think they’re necessarily deteriorating. I think it’s a lull between decision points, right? I think we haven’t agreed on having new talks with them yet.

So, perhaps, they’re just trying to fan the flames a little bit to approach the talks with more leverage, right? If they walk into the talks after some provocative acts, if America is looking to just get them to stop the missile tests, that gives them something extra to trade.