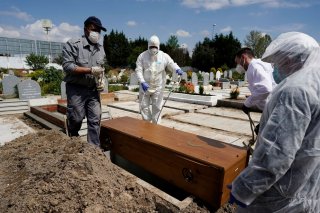 Vaccination is underway for the 2017-2018 seasonal flu, and next year will mark the 100-year anniversary of the 1918 flu pandemic, which killed roughly 40 million people. It is an opportune time to consider the possibility of pandemics – infections that go global and affect many people – and the importance of measures aimed at curbing them.

The 1918 pandemic was unusual in that it killed many healthy 20- to 40-year-olds, including millions of World War I soldiers. In contrast, people who die of the flu are usually under five years old or over 75.

The factors underlying the virulence of the 1918 flu are still unclear. Modern-day scientists sequenced the DNA of the 1918 virus from lung samples preserved from victims. However, this did not solve the mystery of why so many healthy young adults were killed.

I started investigating what happened to a young man who immigrated to the U.S. and was lost during World War I. Uncovering his story also brought me up to speed on hypotheses about why the immune systems of young adults in 1918 did not protect them from the flu.

Certificates picturing the goddess Columbia as a personification of the U.S. were awarded to men and women who died in service during World War I. One such certificate surfaced many decades later. This one honored Adolfo Sartini and was found by grandnephews who had never known him: Thomas, Richard and Robert Sartini.

The certificate was a message from the past. It called out to me, as I had just received the credential of certified genealogist and had spent most of my career as a scientist tracing a gene that regulates immune cells. What had happened to Adolfo?

A bit of sleuthing identified Adolfo’s ship listing, which showed that he was born in 1889 in Italy and immigrated to Boston in 1913. His draft card revealed that he worked at a country club in the Boston suburb of Newton. To learn more, Robert Sartini bought a 1930 book entitled “Newton War Memorial” on eBay. The book provided clues: Adolfo was drafted and ordered to report to Camp Devens, 35 miles from Boston, in March of 1918. He was later transferred to an engineer training regiment.

To follow up, I posted a query on the “U.S. Militaria Forum.” Here, military history enthusiasts explained that the Army Corps of Engineers had trained men at Camp A. A. Humphreys in Virginia. Perhaps Adolfo had gone to this camp?

While a mild flu circulated during the spring of 1918, the deadly strain appeared on U.S. soil on Tuesday, Aug. 27, when three Navy dockworkers at Commonwealth Pier in Boston fell ill. Within 48 hours, dozens more men were infected. Ten days later, the flu was decimating Camp Devens. A renowned pathologist from Johns Hopkins, William Welch, was brought in. He realized that “this must be some new kind of infection or plague.” Viruses, minuscule agents that can pass through fine filters, were poorly understood.

With men mobilizing for World War I, the flu spread to military installations throughout the U.S. and to the general population. It hit Camp Humphreys in mid-September and killed more than 400 men there over the next month. This included Adolfo Sartini, age 29½. Adolfo’s body was brought back to Boston.

His grave is marked by a sculpture of the lower half of a toppled column, epitomizing his premature death.

The legacy of victims of the 1918 flu

The quest to understand the 1918 flu fueled many scientific advances, including the discovery of the influenza virus. However, the virus itself did not cause most of the deaths. Instead, a fraction of individuals infected by the virus were susceptible to pneumonia due to secondary infection by bacteria. In an era before antibiotics, pneumonia could be fatal.

Recent analyses revealed that deaths in 1918 were highest among individuals born in the years around 1889, like Adolfo. An earlier flu pandemic emerged then, and involved a virus that was likely of a different subtype than the 1918 strain. These analyses engendered a novel hypothesis, discussed below, about the susceptibility of healthy young adults in 1918.

Exposure to an influenza virus at a young age increases resistance to a subsequent infection with the same or a similar virus. On the flip side, a person who is a child around the time of a pandemic may not be resistant to other, dissimilar viruses. Flu viruses fall into groups that are related evolutionarily. The virus that circulated when Adolfo was a baby was likely in what is called “Group 2,” whereas the 1918 virus was in “Group 1.” Adolfo would therefore not be expected to have a good ability to respond to this “Group 1” virus. In fact, exposure to the “Group 2” virus as a young child may have resulted in a dysfunctional response to the “Group 1” virus in 1918, exacerbating his condition.

Support for this hypothesis was seen with the emergence of the Hong Kong flu virus in 1968. It was in “Group 2” and had severe effects on people who had been children around the time of the 1918 “Group 1” flu.

What causes a common recurring illness to convert to a pandemic that is massively lethal to healthy individuals? Could it happen again? Until the reason for the death of young adults in 1918 is better understood, a similar scenario could reoccur. Experts fear that a new pandemic, of influenza or another infectious agent, could kill millions. Bill Gates is leading the funding effort to prevent this.

Flu vaccines are generated each year by monitoring the strains circulating months before flu season. A time lag of months allows for vaccine production. Unfortunately, because the influenza virus mutates rapidly, the lag also allows for the appearance of virus variants that are poorly targeted by the vaccine. In addition, flu pandemics often arise upon virus gene reassortment. This involves the joining together of genetic material from different viruses, which can occur suddenly and unpredictably.

An influenza virus is currently killing chickens in Asia, and has recently killed humans who had contact with chickens. This virus is of a subtype that has not been known to cause pandemics. It has not yet demonstrated the ability to be transmitted from person to person. However, whether this ability will arise during ongoing virus evolution cannot be predicted.

The chicken virus is in “Group 2.” Therefore, if it went pandemic, people who were children around the time of the 1968 “Group 2” Hong Kong flu might have some protection. I was born much earlier, and “Group 1” viruses were circulating when I was a child. If the next pandemic virus is in “Group 2,” I would probably not be resistant.

It’s early days for understanding how prior exposure affects flu susceptibility, especially for people born in the last three to four decades. Since 1977, viruses of both “Group 1” and “Group 2” have been in circulation. People born since then probably developed resistance to one or the other based on their initial virus exposures. This is good news for the near future since, if either a “Group 1” or a “Group 2” virus develops pandemic potential, some people should be protected. At the same time, if you are under 40 and another pandemic is identified, more information would be needed to hazard a guess as to whether you might be susceptible or resistant.