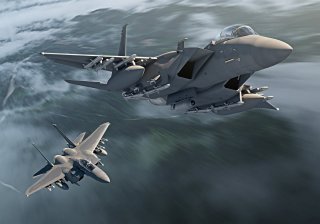 The first of the United States Air Force's Boeing F-15EX fighters arrived at Eglin Air Force Base (AFB), Florida earlier this month. Touted by the defense contractor to be a cost-effective aircraft for the service, the F-15EX is set to undergo combined developmental and operational tests.

As part of the National Defense Strategy, the Air Force is required to purchase seventy-two combat aircraft per year, and the upgraded F-15EX has been seen as the best way to meet those goals. Last year, the Air Force awarded Boeing a $1.2 billion production contract to build and deliver eight F-15EX aircraft, with two arriving this year followed by an additional six in 2023. All will be deployed to Elgin AFB.

The Air Force could eventually receive a total of 144 F-15EX aircraft.

"It's a special day for the base and our mission," said Brig. Gen. Scott Cain, 96th Test Wing commander. "We’re very proud to be part of the next evolution of this historic aircraft. I look forward to seeing this unique test collaboration prepare the F-15EX for the warfighter."

The newly arrived aircraft bears its unit insignia EX1 marked with "ET" from the 96th TW’s, 40th Flight Test Squadron. The next aircraft, EX2, which is scheduled to arrive next month, will display the "OT" tail flash to represent the 53rd Wing’s 85th Test and Evaluation Squadron.

The aim of integrated testing, which will begin in the coming weeks, will be to ensure the EX is delivered to a potential warfighter as soon as possible, while further ensuring the aircraft meets its test objectives. Eglin AFB's testers will allow the teams to identify any system issues early on, so they can be addressed before the F-15EX's increased production and delivery to the squadrons.

The Operational Flight Program Combined Test Force, or OFP CTF, at Eglin AFB will manage test planning and oversee all the groundwork for the EX's test program, the Air Force announced.

“Combining these test capabilities on day one of flight test helps ensure F-15EX is ready to execute on air tasking order day one. We’re confident that along with our OFP CTF partners running test management, we will provide that capability faster to the warfighter than ever before,” said Lt. Col. Richard Turner, 40th FLTS commander, who flew the new EX to Eglin AFB.

The two-seat fighter with U.S.-only capabilities was developed as a next-generation variant of the combat-tested, 1980s-era F-15 fighter. It is still a fourth-generation aircraft, but its developers have highlighted the fact that the plane's new adapted technologies and upgradeability make it a viable, lethal, high-threat environment-capable attack platform. The F-15 has already subsequently evolved to encompass more roles, most notably with the deployment of the F-15E Strike Eagle in 1989, when it saw the addition of substantial air-to-ground capability, including a second cockpit for a weapons systems operator.

Additionally, the new F-15EXs are likely to remain flying for decades to come, while the Air Force has estimated F-15EX fighter shares about 70 percent of parts with the current F-15Cs and F-15Es that they will be replacing. Not only are the original production lines in St. Louis still in place, but the training facilities, maintenance depots, and other infrastructure can also be be readily shifted to F-15EX support.