What Makes a Warrior? History Tells Us to Look at the WWII Pacific Theater 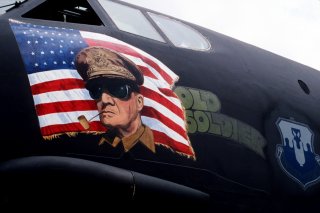 Even in an age when modern armies plunge into battle laden with technology, firepower, and all the meals ready to eat they could eat, it all comes down to the blood and toil of human beings—and those who lead them make a huge difference.

It was a hot, wet, miserable December for the 32d Infantry Division in 1942. The Japanese held two impregnable defensive positions on the swampy lowland along a narrow strip of the northeastern coast of Papua New Guinea. The westernmost location included Buna Mission, the pre-war government station, and Buna village, a half-mile northwest of the station. Division commander Edwin Harding called this position the Urbana Front, named for Corps commander Robert Eichelberger’s birthplace.

The men on the Urbana Front were a spent force. Eichelberger had to relieve Harding and most of the division’s leadership. Eichelberger believed that the most promising course was to pressure the flank of the village between that position and the mission.

Eichelberger appointed Brigadier General Albert W. Waldron as the acting division commander. Eichelberger and Waldron each accompanied a platoon for this attack. Waldron led from the front, determined “to show them that I didn’t give a damn.” He was hit in the shoulder by a bullet and knocked off his feet by an explosion.

In minutes, more than half the company was dead or wounded in foul pools of a blood-red swamp. With Waldron down, Eichelberger would serve both as the corps and division commander for the remainder of the battle. At times he had to act more like a company commander or even a squad leader. He was in the thick of the mud, blood, and sweat of war.

Meanwhile, now acting platoon leader Staff Sergeant Herman J. F. Bottcher was ordered to advance his platoon. Before he fell wounded, Waldron had watched the sergeant methodically prepare for the advance. Bottcher set up a machine gun position to clear the trees of snipers. Meanwhile, he called for demolition material to be brought up to blow the enemy breastworks that guarded the Japanese flank.

An enemy round landed amid the four men carrying the charges, killing two instantly. Bottcher was undeterred, deciding to root out the positions using his infantry alone. He led the remnants of the platoon forward, pausing to spot, outflank, and clear each enemy bunker that blocked his path.

Every time Bottcher’s men wiped out an entrenched position, they broke a link in the chain, opening up more and more room for the small group to advance without coming directly under the withering fire of the Japanese defenses. By the afternoon, Bottcher with only about a dozen men left drove all the way to the beach and dug in splitting the Japanese position in two.

Despite enemy counterattacks from the mission and the village, the position held. Though weeks of fighting remained, the Japanese foothold was untenable. Eichelberger, men like Bottcher, and a ragged band of Americans won the battle.

It is part of the mythology of war that national character counts for much. While today we laud the veterans of World War II as the “greatest generation,” when the war started, they were anything but. The achievements of Sergeant Bottcher were a case in point.

Bottcher was not a typical soldier or an average American by any measure. When he got excited, his guttural German accent made him barely intelligible. He had fought in the Spanish Civil War under the Abraham Lincoln Brigade. Decorated for bravery and promoted on the battlefield to the rank of captain, Bottcher had had a thorough education in the misery and the skills of battle. Though his American citizenship was revoked, he was allowed to enlist in the American Army.

On Papua New Guinea whether Bottcher was a fellow traveler of the Comintern was of less concern than his fighting qualities. Devoid of officers, Bottcher was selected to lead the platoon in part because he was a natural leader—one of the few physically and mentally prepared for the rigors of war. He was an exception.

Harding summed up the issue well when wrote the theater commander Douglas MacArthur requesting reconsideration of his relief. There has been criticism of the conduct of the troops in battle, he wrote:

Certainly they did not fight as skillfully as they must learn to fight. There was poor leadership as well as good. A few officers had to be relieved of command of their units and assigned to jobs behind the lines. Some men broke under the strain, others succumbed to exhaustion. The process of separating the men from the boys in the ordeal by battle worked as it always does.

Eichelberger agreed. He told MacArthur, “I now have more time for reflection and I realize that our men whom I found in the Buna area were half-starved…A few weeks of that diet coupled with fever and the Japanese could have finished them off with clubs.” In contrast, he noted the other divisions would be coming into combat not only better prepared for such harsh conditions, but trained and tested.

It was all a reminder that courageous, resilient leadership, training, and experience in battle is a formula for victory that transcends material advantages.