What the Muslim Ban, Atlanta Shootings, and Gen Z’ers Can Teach Us 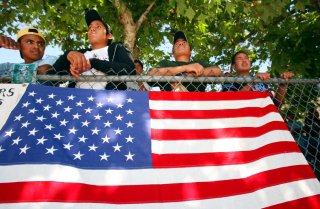 Mana Kharrazi sees a stark connection between the shootings in Atlanta last week and scapegoating the pandemic on China. “I think what we need to recognize…something I think communities of color in diaspora communities, in particular, have always felt…Whenever there's some sort of statement or policy in the foreign policy sector, it always plays domestically, and this is just a reflection of the domestic side of what happens with foreign policy.”

Kharrazi currently serves as the Rapid Response Campaign Director for MoveOn and helps lead the No War Campaign. In her experience working on racial justice and civil rights issues, including with youth and refugee communities, she has seen how movement work and organizing can affect change. And now, with a new Congress and U.S. administration, she sees some important factors to take into account. In her interview with Press the Button, Kharrazi outlines where she sees the most energy and opportunity in movement work.

She is particularly impressed by the work and participation of youth leaders, specifically from the youngest, most diverse generation: Gen Z. “They're growing up, at a time when there's increased hate, they're dealing with school shootings, they're dealing with all sorts of hate crimes,” she explained. “We've had all sorts of crises around democracy…in spite of all of that…that's helped shape a very intersectional lens for them.” Given how early electoral participation often creates life-long voters, Kharrazi sees many of them on the path to continue that level of engagement.

Another change that Kharrazi sees in movement work is how more organizations working in coordination with each other. Although Trump’s policies and rhetoric exposed deep divisions among various communities, she described how different movements—include climate change, racial justice, reproductive rights, diasporas, and many others—now see how working in collaboration can advance their agendas more effectively than competing for attention.

She sees that especially in the context of organizing in Southern states. Noting how people can have an antiquated image of the South, she highlighted that the region has a rich history of civil rights and the learning of elder organizers to draw upon. Kharrazi described the South as “in a lot of ways, Ground Zero” for organizing and fights related to racial justice, labor and voting laws, the death penalty, and climate change. This proving ground will continue to feature in national conversations, given its timeliness and impact.

While the local impact is an important part of these debates, Kharrazi sees foreign policy as one of the drivers that organizers must address as they fight on key domestic issues. Having spent years working with both refugee communities and youth leaders, Kharrazi was pushed into action organizing against the Muslim Ban when she saw the impact of the executive orders on the Iranian diaspora. “I remember…seeing my community members across the world being scattered and stuck in airports,” Kharrazi explained. “People trying to figure out how they're going to get their parents or their uncles and aunts to come back home.” As she thought about what she had been telling the youth she had been working with—“about their role as people who could be agents of change, who could shape their community.” She realized in that moment she had to “walk the walk… and you know I’m talking all the time, about how they can really step up as leaders, and here I am in this moment, where I could really do the same thing.”

In her role as Executive Director of Iranian Alliances Across Borders (IAAB), an organization dedicated to strengthening the Iranian diaspora in the United States and empowering youth, Kharrazi contributed her organizing and campaign abilities to the legal team that led the legal battle against the Muslim Ban 3.0. IAAB’s lawsuit succeeded in obtaining an injunction in October 2017 and won in the Fourth Circuit in February, 2018, before it was overturned. By early 2020, she was planning to step away from her role at IAAB and reassess next steps when the United States killed Iranian Gen. Soleimani, leaving the two countries on the brink of war. Throwing herself into the organizing in the wake of the assassination, she used her understanding of the Iranian diaspora and need for diplomacy as a part of a broader effort resulting in hundreds of “no war with Iran” events and actions nationwide in the days following the strike.

Today, she sees an opportunity for President Joe Biden to take leadership in pursuing diplomacy with Iran. Kharrazi perceives no appetite among the American public for a new war, let alone continuing the two wars that the United States is already in, and instead a desire to withdraw American troops as responsibly as possible. “It's time for us to take a different path,” Kharrazi said, “and I hope that President Biden understands that he has a great opportunity to show his leadership and strength by taking the path of diplomacy.”

To support Mana Kharrazi’s work, visit her website. The entire interview with Mana Kharrazi is available on Press the Button.

Michelle Dover is the director of programs at Ploughshares Fund, where she leads the grantmaking team.