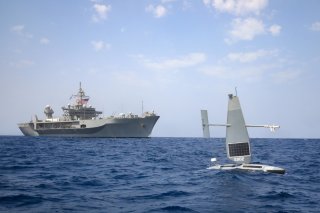 Admiral Gilday thinks that the United States Navy must invest in modernizing the fleet and building capacity.

During the First Sea Lord’s Sea Power Conference, hosted by the Royal Navy, Chief of Naval Operations Adm. Mike Gilday spoke about how the U.S. Navy needs to adjust in response to the “challenging times” the world is facing amid the conflict in Ukraine.

Gilday touched first on lessons learned during the conflict and battlefield knowledge that the United States and allies can leverage to better respond to future threats.

“A key takeaway thus far has been the importance of intelligence sharing among our allies and partners. Before the invasion of Ukraine, the combined international community warned the world that Putin would attempt to topple the government of Kyiv,” Gilday explained.

“By sharing and amplifying the facts through open sources, our collective information efforts helped take away the strategic and tactical surprise that Putin relied upon during his 2014 capture of Crimea,” he said.

Gilday added that “the Kremlin’s attempts at false flag operations met stiff resistance, as the international audience had seen the tank buildups along the Ukrainian border.”

Besides lessons learned, the chief of naval operations also talked at length about the technologies the Navy will need to master in the future and the importance of modernization.

The U.S. Navy needs a “modernized, lethal, connected force—lethality in terms of long-range fires like hypersonics. Increased range of our air wings is another important attribute,” Admiral Gilday explained.

He added that “with respect to survivability of the fleet, we’re investing time, effort, and resources into groundbreaking technologies like directed energy, high-power microwave energy, and electronic warfare.”

In Gilday's opinion, the other primary goal for the U.S. Navy is building naval capacity. The Navy is aiming “for a larger hybrid fleet of manned and unmanned vessels,” he said.

“Our efforts right now in the unmanned domain have been substantial, particularly in the Middle East out of our [U.S.] Fifth Fleet headquarters in Bahrain with our new Task Force 59.”

“More specifically, we have prioritized four efforts for alignment in the near term to integrate, accelerate, and deliver our most critical capabilities to close gaps over the next few years. This includes long-range fires—how we shoot; counter-C5ISRT—how we maneuver; terminal defense—how we defend the fleet; and contested logistics—how we resupply,” Admiral Gilday added. “These capabilities will help us maintain combat credibility in increasingly transparent and contested seas.”

Vladimir Putin’s invasion of Ukraine has unintentionally galvanized the West’s most significant refocus on defense since the end of the Cold War—and the Navy is not letting the opportunity go to waste. With more ships, longer-range weapons, and more manpower, the U.S. Navy’s future is one of improvement, not decline.