What Products Are Excluded from the Trade War? 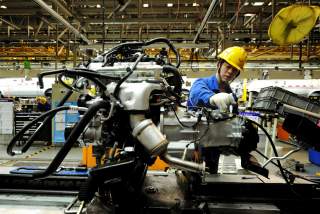 President Donald Trump approved a temporary exemption of 437 Chinese products from U.S. tariffs implemented in September 2018, according to a Friday notice by the Office of the Trade Representative.

Products being exempted from the $200 billion until August 2020 include straws, skateboards, dog leashes, Christmas lights and car radiators. The products stem from a list of more than 1,100 exclusion requests by U.S. companies, CNBC reported Friday.

China exempted more than a dozen U.S. products from Chinese tariffs on Sept. 11. The tariffs exclusions come about a month before U.S. and Chinese trade officials are expected to hold talks in October in Washington, D.C., according to CNBC.

“I’d rather get the whole deal done. We’ve taken in many, many billions of dollars of tariffs. I’d rather get the entire Chinese done — look, if we’re going to do the deal, let’s get it done,” Trump told reporters at the White House on Sept. 12, the Washington Post reported.

“A lot of people are talking about it, and I see a lot of analysts are saying an interim deal, meaning we’ll do pieces of it — the easy ones first. But there’s no easy or hard. There’s a deal or there’s not a deal. But it’s something we would consider, I guess,” he continued.

The U.S. introduced a 15% tariff on Chinese imports valued at $111 billion in 2018 including tools, apparel, footwear and electronics Sept. 1, reported WSJ. The president also announced an increase in tariffs on $250 billion worth of Chinese products from 25% to 30% in an Aug. 23 Twitter post.

“Tariffs will not impact American consumers that much because the Chinese currency has gone down, which gives our importers a discount. Importers can find suppliers outside of China. Absolutely worth it, we don’t want to be servants to the Chinese!” Trump tweeted on Sept. 1, citing economist Peter Morici. “… There is no reason to buy everything from China!”

….is about American Freedom. Redirect the supply chain. There is no reason to buy everything from China!

China retaliated by imposing its own increased tariffs on $75 billion of American products. Both countries plan to further increase tariffs in December unless trade talks impact that outcome, according to The New York Times.

“This doesn’t seem to be an immediate shift in U.S. trade policy, as the U.S. had previously offered some type of tariff exemptions to qualified US goods,” Economist Intelligence Unit Global Trade Lead Nick Marro told CNBC on Friday.

“It’s more in consideration of the trade war impact on the domestic US economy than a concession to China, but this could still help build some goodwill before the trade talks in October,” he continued.