What Is Russia’s Military up to in the Pacific? 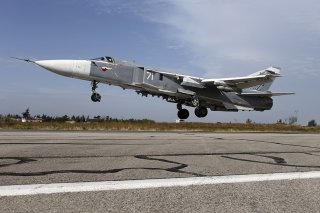 Amid heightened tensions with the North Atlantic Treaty Alliance (NATO), bombers and warships are holding a new round of combat drills to cap off what has been a busy month for Russian military activity in the Pacific Region.

Russia’s Defense Ministry announced on Thursday that Tu-95 and Tu-22M3 bombers conducted exercises in the Pacific Ocean along with surface vessels from the Pacific Fleet. The Defense Ministry added that the bombers took off from an airfield on the Kamchatka Peninsula to Russia’s far east and headed for the central Pacific. While there, they practiced strikes against moving targets and high-value enemy infrastructure. “Three Tu-95 bombers of the Russian aerospace forces … simulated the launch of cruise missiles at designated targets,” the statement read. “Apart from that, Tu-22M3 long-range bombers drilled the skills of patrolling and hitting aircraft of the maneuver[ing] enemy.” The Varyag guided-missile cruiser and Marshal Shaposhnikov frigate took part in the drills, as did MiG-31BM fighter jets.

This is the latest instance in a steady stream of Russian military activity in the central Pacific region. Earlier this month, the Defense Ministry’s YouTube channel published footage of Ka-27 helicopters and various vessels from the Pacific Fleet practicing long-distance, mixed-group maneuvers, including efforts aimed at detecting and tracking notional enemy submarines. On the eve of the Geneva Summit between President Joe Biden and Russian president Vladimir Putin, the Russian Navy conducted what is widely being called its largest exercise in the Pacific Ocean since the end of the Cold War. The exercise involved masses of Russian surface vessels, bombers, and fighters. The drills conducted over the course of June also included the Udaloy-class destroyer Marshal Shaposhnikov and three corvettes from Russia’s modernized Steregushchiy-class series: Gromky, Sovershenniy, and Hero of the Russian Federation Aldar Tsydenzhapov.

Governments almost always aim to be as nondescript as possible when announcing and commenting on military exercises, but the content and composition of the Pacific Fleet’s recent drills strongly suggests that they were aimed at NATO in general and the U.S. Navy in particular. By the Kremlin’s own admission, several formations of the Pacific Fleet ventured “about 2,500 miles southeast of the Kurile Islands” and practiced “detecting, countering, and launching missile strikes against carrier strike groups of the notional enemy.” The U.S. military scrambled F-22 fighters from what would be nearby Hawaii at some point during those exercises, though the aircraft reportedly kept their distance and were not intercepted. It should be noted that the dating of the Pacific Fleet’s drills and military movements in June can get murky, as the day on which an exercise was announced does not necessarily correspond to the day on which it was held.

Russia’s ongoing exercises in the Pacific come amid heightened military tensions in the Black Sea, where Su-24 planes and surface vessels from Coast Guard and Black Sea Fleet allegedly fired warning shots and dropped bombs to chase the British Type 45 destroyer HMS Defender away from waters claimed by Russia.