What U.S. Engagement With Nepal Means for India 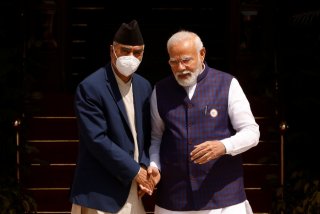 Strategically, India and the United States have recently converged on a plethora of issues. The two nations have collaborated on regional issues despite their differing views on Russia. Yet as the United States advances its interests in the Indo-pacific region, it should seek to avoid conflict with India’s geopolitical endeavors and not militate against India’s regional interests and strategy. Therefore, India welcomes the United States’ engagement with Nepal, as long as such dialogue between Kathmandu and Washington either promotes New Delhi’s interests or promotes the interest of either party without causing harm to New Delhi’s interests in the region.

New Delhi and Washington’s foreign policy is essential to their relations with China. A vital feature of Indian foreign policy is maintaining a safe distance from China. Further, New Delhi also desires a safe and peaceful Indo-pacific, which is being threatened by Chinese aggression and expansion. At the same time, Washington is interested in checking China’s increasing influence in the Indo-pacific region. Therefore, broadly, Indian and U.S. interests are converging on China.

Furthermore, Washington’s growing engagement with Nepal would assist New Delhi’s efforts in countering China’s influence in the region. With the entry of the United States, China will have to face the twin obstacles of India and the United States strategically, thereby diverting China’s sole attention from India. Strategic engagement between Nepal and the United States would also facilitate greater engagement between Nepal and India in cross-border connectivity in areas such as electricity trade. For example, projects selected under the $500 million Millennium Challenge Corporation (MCC) grant (a foreign aid grant funded by the U.S. government), like a 400 kilovolt (kV) transmission network to allow Nepal to undertake electricity trade with India and strengthen road access to Nepal’s East-West Highway, would help the nation achieve more robust internal and external connectivity with India. Such engagement between India and Nepal would help counter the inroads China has made into the economic domain in Nepal.

The United States’ entry would also help counter China’s influence in Nepal’s sociocultural and political scene. Contrary to former times, when India was more aggressively involved in Nepali internal affairs, India has gradually shifted toward keeping a low profile. In this manner, India would be able to observe and spectate the rising conflict between Washington and Beijing. Further, given the connection India enjoys with Nepal’s culture, language, and social life, India retains the option of increasing its involvement with Nepal if it senses that Washington’s actions could threaten India’s interests in the country and the region.

Since relations between New Delhi and Washington are growing cordial, it is only logical that India must not be overly concerned with Nepal-U.S. ties at the moment. However, India might not be pleased if the State Partnership Program (SPP), an exchange program led by the U.S. Department of Defense, results in closer military connections between Nepal and the United States. Such a development would have catastrophic effects on Indo-Nepal relations. The SPP would diminish the Indian Army’s exclusive and unique social-cultural connections with the Nepali Army. Further, India’s conservative high command seems to find the above possibility incomprehensible. While New Delhi has welcomed past interactions between Kathmandu and Washington, there have been claims that India was not in favor of the SPP, as it believed that Washington would jeopardize the long-standing unique bond shared between the Indian and Nepali military forces.

Vedant Choudhary is a student of law at Symbiosis Law School, Pune (India).