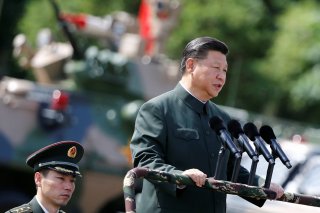 From cybersecurity to maritime issues, America’s national security community has left no stone unturned when attempting to understand the future of conflict with China. Except for one issue: counterinsurgency. Some already believe insurgency rather than conventional war is the future of U.S.-China competition. And others assert that deprioritizing counterinsurgency doesn’t mean the United States can discard it altogether. If these beliefs hold true, then the United States must analyze how its competitor might fare in similar adventurism.

“Counterinsurgency” only appears once in the Department of Defense’s 200-page report about China’s military and security developments that was published last year. And in some ways, the lack of attention is understandable.

First, and most obvious, is that China hasn’t fought any war since 1979, and thus there is no large-scale foreign military intervention to inform its counterinsurgency strategies. However, the last war China fought was the Sino-Vietnamese War of 1979, in which 200,000 People’s Liberation Army (PLA) soldiers withdrew from Vietnam after encountering the same guerrilla tactics the United States had fled from four years earlier.

Second, when China has intervened militarily abroad in non-war missions, it has been small-scale. These ventures occurred in places like Africa and Afghanistan, where the Chinese engaged in limited proxy conflict against the Soviet Union. That reluctance comes from Chinese leaders who, as early as 1985, noted that the primary threats come not from high-intensity conflicts abroad but in border areas like Taiwan, Tibet, and India. And even if they were to venture outside these zones, the PLA during the Cold War was too poorly equipped to maintain long-distance fighting for extended periods.

Clausewitz, but with a Maoist Twist

To begin, it is imperative to understand Mao’s insurgency doctrine. Mao, the founding father of the Chinese Communist Party, derives this doctrine from Carl von Clausewitz, especially when it comes to targeting an adversary’s center of gravity. “Insurgency can neither exist nor flourish,” Mao states, “if it separates itself from their sympathies and cooperation.”  In his view, political mobilization of the population allows insurgents to blend in, set up bases to conduct operations, and launch attacks with the people’s assistance. Here, it is critical to remember who Mao’s enemy was at the time: Japan during the second Sino-Japanese War. Japan lacked the hard manpower to occupy a territory as large as China, but militant nationalism fueled its will to fight and adopt different strategies, not abandon the war altogether. Mao knew to avoid a decisive engagement that would’ve mobilized the whole Japanese people.

Following in Clausewitz’s footsteps, Mao posited that the best way to beat the insurgent center of gravity would be the same way a military should beat any other center of gravity: by repeatedly striking at its core. Mao utilized both demoralization tactics and brutal force to convince the enemy that fighting China would be an endeavor so devastating that surrender represents the only way out.

These are not just theories: when Mao’s Red Army fought anti-Communists in Tibet, it crucified, burned, or boiled alive civilians who supported the rebels. For demoralization, Mao recommended that soldiers carry leaflets extolling the virtues of communism when encountering anti-communist peasantry to ensure the people never turn insurgent.

Mao Would Love the Uyghur Repression

In Xinjiang, Mao’s doctrine of brutal force combined with propaganda has made its way into contemporary Chinese counterinsurgency. Alden Leader, an editor at the Georgetown Journal of International Affairs, summarized it this way:

“Chinese efforts to prevent an insurgency in Xinjiang are authoritarian and brutal. [...] Conditions in the camps are inhumane and prison-like, with people enduring torture and dying. These concentration camps are rife with brainwashing and indoctrination.”

These methods suggest China’s suppression of the Uyghurs is rooted in nationalism, much as insurgencies themselves are. In its drive to unite separatists into one national image and attain great power status, China is submerging identities that threaten the disintegration of the nation. But it can’t do so without the Chinese people. By waging an online campaign that paints Uyghur separatists as terrorists, the CCP seeks to gain popular support for increasingly repressive actions against the Uyghurs. If they don’t, China says, not only is the security of the state at stake but more importantly, its ascent to great power status is as well.

China will likely export these repression methods abroad if it ever comes down to it because…they’re effective. The CCP has been using the same strategy since the late 1950s to great success: the prospects of an Uyghur revolt are slim to none, China controls its security interests in the region without fear of so-called “terrorist” threats, and separatist movements in Xinjiang have never gone beyond small-scale attacks here and there.

Regarding intelligence, authoritarian governments are sure to export their domestic capabilities abroad. They establish intelligence dominance by collecting human intelligence not through goodwill but blackmail, torture, and various other tactics. In some cases, like Algeria, they can even infiltrate rebellions posing as sympathizers and slaughter villagers to generate disgust from the people. Currently, China exports its intelligence capabilities through cyber espionage and sales of surveillance systems to other authoritarians. But in counterinsurgency campaigns, China can use these now-polished tools to stay steps ahead of insurgent movements.

On repression, authoritarians cut off civil societies like universities, professional organizations, churches, and even soccer clubs if need be. Civil societies are a primary source of coordination for rebels, which is why the Soviets banned the Ukrainian Greek Catholic Church because of its potential ties to Ukrainian rebels. The elimination of civil societies also fits the idea of the population being the insurgent “center of gravity” because it blocks a source of recruiting and resistance, forcing supporters to go underground instead of remaining in the open, where insurgents prefer to operate.

Last but not least, authoritarian governments, like Josef Stalin’s actions in the North Caucasus or Burma’s response to Communist opposition, “transform the conflict zone into a closed system” by blocking trade or imposing curfews. Isolating the area separates insurgents from supporters so they can’t retreat into the mountains or other geographically advantageous domains. Beyond physically isolating rebels, the government may cut off access to food, funds, and intelligence, which mostly stems from the civilian population.

Taken together, Mao’s insurgency doctrine, the treatment of Uyghur Muslims in Xinjiang, and authoritarian approaches to counterinsurgency provide a theory about Chinese counterinsurgency strategies: that it will prioritize the brutal repression of insurgency population through force and propaganda while using its military dominance to establish impenetrable intelligence networks and geographic isolation. With the PLA, China will seek to swarm its enemy with enough force to discourage non-combatants from joining the insurgency. Then, it will lean on its intelligence capabilities to learn of rebellious movements before they occur, likely by employing cyber espionage, signals intelligence, and/or threats of violence. As a last resort, China can use ground troops to not only isolate insurgents from supporters but to dissuade foreign allies of the insurgency from providing supplies.

Will all These Strategies Work?

Both the examples of Tibet and Xinjiang are domestic to China, where China can draw upon much political will and a lack of foreign interference. But to successfully export those strategies, it will need to adapt to the political environment and recognize that there may exist other centers of gravity than the insurgency’s supporters. It’s also possible that these strategies will work best if they’re gradually imposed. Chinese leaders may choose to launch a counterinsurgency with light manpower and propaganda at first, and end with isolation and brutalization if the situation unravels.

Why China and America Should Care

For China, facing an insurgency is approaching the nontheoretical. With investments in infrastructure, trade, and military bases, combined with simply more Chinese nationals abroad, China is opening itself up to terrorist attacks. For now, extremist groups are more concerned with attacking the United States, but Chinese efforts “often change local dynamics, creating new terrorism risks.” These changing dynamics are occurring in countries with a terrorist presence, like Nigeria where China built a $1.5 billion railway last year. To be sure, China won’t go guns blazing in Afghanistan or Iraq anytime soon, as they have little incentive to do so, but an all-inclusive military policy shouldn’t discount counterinsurgency.