What Would Have Happened If Lincoln Had Used Combat Elephants in the Civil War? 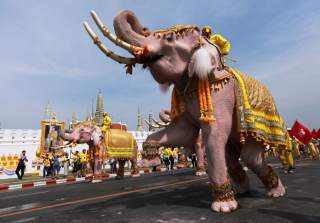 “New kind of Iron,” muttered Buford, but went below with Reynolds.

Amidst the crackle and pop of the cavalry carbines, Reynolds and Buford rode onto McPherson’s Ridge.

“Who’s that forming in the woods?” asked Reynolds.

“Do you see those colors there, just along the Chambersburg Pike?”

“I’m going to order the Illinois troopers to fall back to let Archer’s men think they have them on the run, then you’re going to charge. Your objective is those colors, where Heth’s headquarters are. Do you understand?”

“Yessir!” Tom’s face was a shining red of delight. He turned and ordered his companies down into the valley behind McPherson’s Ridge.

Reynolds gave the order, and the dismounted cavalry rapidly fell back from the oncoming butternut-clad lines. The rebel yell now pierced the morning air and the red flags of Archer’s Brigade leapt forward to pursue the running Yankees. The lines rolled up the crest of the ridge and the troopers ran for it.

“Iron Brigade, forward!” cried Reynolds, from behind Custer’s formation. The shrill sound of the rebel yell was drowned by the deep and thunderous baying of fifty-one stolidly U.S. elephants, all sounding the charge. In line of battle, the 1st Ohio Pachyderms rolled forward, the massive beasts thundering and braying as they went, while from the towers, the marksmen unleashed a murderous fire.

Archer’s rebels stood stock still. Their minds tried to grasp what they were seeing, but they could not. Calef’s Battery, and now Hall’s Maine Battery, cut great holes down their flanks with grape and canister. The five pack howitzers of the 1st Ohio gaped forth their deadly loads as they closed with the bewildered and stunned enemy that had not yet found their feet. Rebels were twisting and falling this way and that, caught by the rifle fire from the towers. The wiser ones turned on their heels and fled, screaming. The less wise attempted to fight – and were ridden down in a bloody pulp by the massive beasts.

Pettigrew’s brigade was now thrown forward, where it met the screaming survivors of Archer’s brigade. Hesitating, the North Carolinians cautiously advanced up the slope. Here, they met no fearsome beasts, but instead the shocking volleys of the 2nd and 7th Wisconsin. They were raked in the flank by the 19th Indiana, and then again by the 24th Michigan, advancing out of the woods, pouring volleys. Pettigrew’s brigade drifted back towards the Chambersburg Pike to try to get room to maneuver.

“Get them, Major!” yelled Reynolds, but he needn’t have spoken. Custer’s battalion had already wheeled and was charging down the pike, the braying of the elephants mingling with the huzzahs of the men. The battalion cut a bloody swath down the pike, the tusks of the elephants now coated red with rebel blood. Caught between the fire of the infantry and the charge of the 1st Ohio, Pettigrew’s brigade turned and fled.

Heth’s division simply ceased to exist as any type of fighting force as unit after unit threw down their arms and scrambled for the rear as fast they could do. Custer’s battalion literally rode over Heth’s divisional headquarters. Heth himself surrendered to Custer, stuttering that he thought they were only militia and that his dander was up, and asked if this was the end of the world.

“It is of yours,” said Custer, cheerfully, collecting Heth’s sword. In the chaos, his battalion stamped and slew its way down the Chambersburg Pike. By noon, it had eradicated most of A.P. Hill’s Corps. There had been very little fighting – a few elephants had been wounded but were still in the fight. The U.S. infantry regiments had been moving along at the double quick with them, and while winded, were exultant with victory. Reynolds now had most of his I Corps in the fight, leaving the XI Corps to hold Cemetery Hill until the III Corps arrived, which he had ordered to move up at the double.

By 3:00 P.M., Ewell’s Confederate Corps, confused because of lack of communication from Hill – who he assumed was still advancing up the Chambersburg Pike, wandered into Gettysburg at the urging of Robert E. Lee, who demanded answers as to what was going on. As Early’s Division came out of the southern end of the town, they were met by a ferocious artillery fire from Cemetery Hill. In what would be called “another Malvern Hill,” Ewell’s Corps dashed itself against the dug-in XI Corps. Units of the III Corps arrived and began attacking Ewell’s flanks, causing the cautious general to withdraw.

Meanwhile, the Iron Brigade had smashed the head of Longstreet’s Corps. Longstreet himself rode up, got a look at what was happening, and gave orders for his corps to disengage at once. General Lee attempted to lead a Texas regiment in a charge against the 1st Ohio, but found that they would not disobey the taciturn Longstreet and that he was riding into the melee alone. Custer soon had his sword added to his growing collection.

“Well, Robert, this is a fine day,” said Reynolds to Lee as the latter was escorted to the rear under guard. Lee said nothing, but stared in amazement at the wreck and carnage of the once-proud Army of Northern Virginia. The Rebellion was nearly dead.

About the Author: Angry Staff Officer is an Army engineer officer who is adrift in a sea of doctrine and staff operations and uses writing as a means to retain his sanity. He also collaborates on a podcast with Adin Dobkin entitled War Stories, which examines key moments in the history of warfare. Support this blog’s Patreon here.

Pictures by the incredibly talented Dr. Nyri A. Bakkalian, who is a prodigious historian in her own right and can be found on Twitter at @riversidewings