When Should a Naval Pilot Eject? 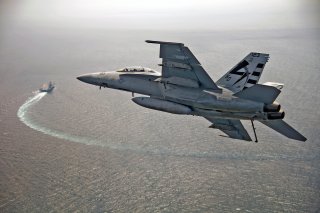 Many of the most famous stories about air history have involved pilots ejecting at exactly the right time. But when is the right time?

The Aviation Geek Club recently looked at that question.

It cited a session in October on the social media site Quora, hosted by retired Navy pilot David Tussey, he answered a question about the conditions under which a fighter pilot could eject from his aircraft without penalty?

“It has to be some condition which prevents normal control and continued flying of the aircraft,” Tussey said in a post. “Ejecting from a flying aircraft is an absolute last-ditch option. In fact, you’re very likely to be very seriously injured during an ejection, so you want to be sure that there is nothing else you can do to recover the aircraft.”

Tussey added certain rules that are in place for when to eject: When the aircraft is uncontrollable below ten thousand feet, when it has suffered a complete electrical failure, has experienced combat damage, is on fire, or has suffered total engine failure below en thousand feet.

However, Tussey added that pilots who eject are unlikely to be second-guessed, even if it means the loss of a plane.

“I can’t recall any situation during my twenty-year Navy career when someone ejected and was criticized for it, or had that count against them,” Tussey said. “Unfortunately, I did know several people who waited too late to eject and it cost them their life… Loss of an aircraft is a serious issue, and there will undoubtedly be a Board of Inquiry to determine what happened. But that is always preferred over a funeral.”

Another person on the thread noted that ejection can also be painful.

“I think many people have no idea that pilot ejection from his aircraft HURTS! How would you like to have a rocket going off under your butt! They usually have bruises on their shoulders, thighs, and other places from the straps that push against their body as they are suddenly thrust up and out of the aircraft,” Tussey said. “It can cause spinal injuries as well. Sure, they train on the ground for that and it hurts there too! But it can save their lives although pilots KNOW they are dooming a multi-million-dollar aircraft and will have to answer for their actions! The military doesn’t take kindly to losing one of their expensive birds that way, but it’s certainly better than the pilot losing his life and maybe whoever is behind or in front of him in his aircraft.”

Tussey is on the Wall of Honor at the Smithsonian National Air and Space Museum, as an “Air and Space Friend.” A graduate of Vanderbilt University, he then entered Navy Flight training, earning his Wings of Gold at NAS Chase Field in 1975.

“David’s Navy career included assignments in Jacksonville, Florida, Beeville, Texas, Yokosuka, Japan, and Washington, DC. He accumulated over 3500 hours in various aircraft types, and has over 900 carrier landings, of which over 300 are at night. He retired as a Navy Commander in July 1992,” the Wall of Honor description said.