Where Will Russia's Troops Go After They Leave Belarus? 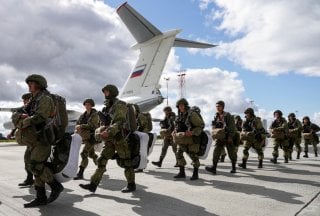 Much of Russian humor is based on inflection, which allows for a play on words and unexpected association. But this week, the Kremlin practically offered the perfect setup for a spot-on punch line when it announced that Russian troops won't remain in Belarus after the current joint military exercises.

The punch line could be: "They'll be heading to Ukraine instead!"

Whether or not that fact is actually true, on Tuesday Kremlin spokesman Dmitry Peskov made it clear that the Russian military won't have a permanent presence in its western neighbor.

"No one has ever said that the Russian troops will stay on the territory of Belarus and there has never been any talk about that," the Kremlin press secretary told TASS.

"These are allied military exercises and, naturally, this implies that the troops will return to their permanent bases after these drills are over," Peskov emphasized.

Where Are the Russians Going?

All joking aside, the real question is where the Russian troops will head next. Moscow has indicated the forces would return to Russia.

The Kremlin spokesman was also asked to clarify whether Russian president Vladimir Putin had agreed during the talks with his French counterpart Emmanuel Macron that Russia would not conduct new maneuvers near the border with Ukraine.

"I have not heard such reports," the press secretary said, replying to a question about whether such claims were true, TASS also reported.

No Invasion of Ukraine?

For months, Russia has repeatedly denied having any plans to invade the former Soviet state, despite a buildup of troops and combat vehicles along the Ukrainian border.

Macron, who arrived in Ukraine on Tuesday, engaged in more than five hours of dialogue with Putin on Monday over the issue of the Russian troop buildup.

"I secured an assurance there would be no deterioration or escalation," Macron told reporters before meeting with Ukrainian president Volodymyr Zelensky on Tuesday to discuss the increased tensions between Moscow and Kiev.

U.S. military and intelligence officials have warned that Russia has assembled 70 percent of the military forces necessary to launch an invasion of Ukraine, which could lead to tens of thousands of civilian deaths and millions of refugees. There are currently more than 100,000 Russian troops near the Ukrainian border, raising fears among the United States and other allies that Moscow may be planning a military incursion against Ukraine in the coming weeks.

Yet, even as the nations seem at an impasse, a French official also told reporters that Macron and Putin had agreed that Russia would pull its troops out of Belarus at the end of the exercises taking place near Ukraine's northern border. The question remains whether they will actually return to Russia.