White Children Will Soon Become the Minority in America 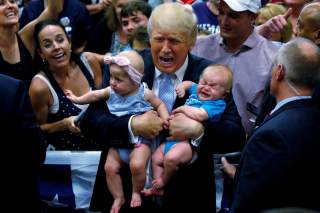 Demographers project that whites will become a minority in the U.S. in around 2045, dropping below 50% of the population.

That’s a quarter-century from now – still a long way away, right?

Not if you focus on children. White children right now are on the eve of becoming a numerical minority.

The U.S. Census Bureau projects that, by the middle of 2020, nonwhites will account for the majority of the nation’s 74 million children.

The share of the U.S. non-Hispanic white population has fallen since the mid-20th century.

In 2018, the last year for which data are currently available, the proportion of people in the U.S. under 18 years of age was just barely more white than nonwhite.

However, children under 11 were more nonwhite than white.

In almost one-third of U.S. states, nonwhite children outnumber all white children under 18 in 14 states – including Nevada, Hawaii, Georgia and Maryland – plus the District of Columbia.

Nonwhite children currently outnumber white children ages 0 to 4 in these 15 states and in Louisiana. In the next few years, the same will be true in North Carolina, Illinois and Virginia, followed a little later by Connecticut and Oklahoma.

Why will white children become the numerical minority?

We draw on the insights of demographer Kenneth Johnson and his colleagues to understand this trend.

First, the declining number of white children reflects the significant aging of the white population.

Whites in the U.S. have a median age of 43.6, much higher than those of all other racial or ethnic groups. Latinos, in particular, are much younger, with a median age of 29.5.

Slightly more than one-fifth of whites are age 65 and older, while elders account for only about one-tenth of nonwhites. Indeed, today in the U.S. there are more white elders than white children.

Whites also have lower fertility rates than most other racial and ethnic groups.

Even if white women increased their fertility levels, their actual numbers of births would not go up that much, because there is a shrinking number of white women of childbearing age.

Only 41% of white women aged 15 and older are in the childbearing ages of 15 to 44, when most births occur, compared to 57% of nonwhite women.

What the future holds

In the coming decades, people of color will have an increasing presence in all U.S. institutions, in higher education, the workforce and the electorate.

Americans are already seeing the consequences of these demographic shifts in higher education. Between 2009 and 2017, the number of white undergraduate students in the U.S. dropped by 1.7 million, while the number of Latino undergraduates rose by 1.1 million.

In addition, U.S. Bureau of Labor Statistics projections show that, between 2014 and 2024, the white share of the civilian labor force is declining, while the share of nonwhites is estimated to rise.

Furthermore, people of color will increasingly be part of the voter rolls and slates of political office seekers in the coming decades.

Despite these expected changes, one thing is certain. The white population is not going to disappear. The U.S. Census Bureau projects that whites will still be the largest racial or ethnic group, accounting for 44.3% of the nation’s population in 2060 and outnumbering Latinos, the second largest group, by 67.9 million.

The reality is that whites will not dominate demographically as they have throughout most of U.S. history, when they accounted for as much as 90% of the country’s population. Roughly speaking, the share of the U.S. white population in 2060 will be the same as it is now in Las Vegas, about 44%.

This article by Rogelio Sáenz and Dudley L. Poston, Jr. first appeared in 2019 in The Conversation via Creative Commons License.