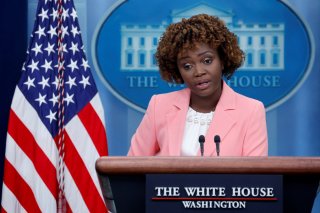 The White House on Thursday confirmed that WNBA star Brittney Griner, currently imprisoned in Russia, met with U.S. embassy officials more than a week after a Russian court rejected her appeal of a nine-year prison sentence, Axios reported.

“We are told she's doing as well as can be expected under the circumstances,” she continued.

Late last month, a Russian court denied Griner’s appeal of her conviction on drug charges. Her sentence, however, will be modified to count the time she spent in pre-trial detention after her February 17 arrest at Moscow’s Sheremetyevo International Airport, with each day in pre-trial custody counting as one and a half days toward her prison sentence. Estimates have pointed to the prison sentence being cut by roughly one year.

“I’ve been here almost eight months, and people with more severe crimes have been given less than what I was given,” Griner, who is serving out her sentence in a penal colony, said during the hearing.

Meanwhile, Griner’s attorneys expressed disappointment after the hearing. The court’s ruling was “not what we expected,” Maria Blagovolina and Alexander Boykov said in a statement.

“We still think the punishment is excessive and contradicts to the existing court practice,” they continued.

U.S. officials have for months tried to bring Griner and former U.S. Marine Paul Whelan home via a prisoner swap but have expressed frustration over what they say is Moscow’s failure to respond to the “significant offer” the United States made over this past summer.

Jean-Pierre on Thursday said that the Biden administration is continuing to follow up on its offer “despite a lack of good faith negotiation by the Russians.”

“As we have said before, the U.S. government made a significant offer to the Russians to resolve the current unacceptable and wrongful detention of American citizens—Brittney Griner and Paul Whalen,” she said.

“I can also tell you that in the subsequent weeks, despite a lack of good faith negotiation by the Russians, the U.S. government has continued to follow up on that offer and propose alternative potential ways forward with Russians through all available channels,” she added. “This continues to be a top priority.”