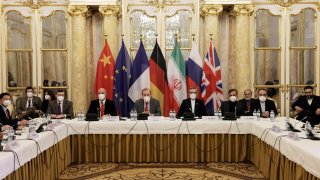 The Biden administration said on Friday that it would restore a sanctions waiver allowing countries to engage commercially with Iran on the country’s civil nuclear program.

Although it expressed hopes that the waiver would lead to a nuclear settlement with Tehran, the White House insisted that the move should not be understood as a “concession to Iran.” It also claimed it was not indicative that an agreement would soon be reached on Iran’s return to the Joint Comprehensive Plan of Action (JCPOA), the nuclear deal negotiated between Iran and the “P5+1” countries, including the United States, in 2015.

That deal was fully in effect from 2015 until 2018, when President Donald Trump withdrew the United States from participation and re-imposed U.S. sanctions against Iran. Although the Iranian government initially indicated that it would continue to participate along with the rest of the P5+1, Tehran gradually withdrew from the deal’s provisions following an increase in tensions in the Middle East.

A State Department spokesperson said that the Biden administration had issued the waiver because it would “enable some of our international partners to have more detailed technical discussions to enable cooperation that we view as being in our non-proliferation interests,” adding that the waiver “would be essential to ensuring Iran’s swift compliance with its nuclear commitments.”

“If talks do not result in a return to the nuclear agreement, such technical discussions could still contribute to achieving our non-proliferation goals,” the spokesperson added.

The waivers allow European, Russian, and Chinese nuclear contractors to participate in projects at Iran’s sole operational nuclear plant at Bushehr, as well as at the Tehran Research Reactor.

After the Trump administration withdrew from the JCPOA, it initially continued to grant the waiver, indicating that doing so would help to preserve Iran’s civil nuclear program and “reduce proliferation risks.”

However, amid increasing tensions between Washington and Tehran, former Secretary of State Mike Pompeo formally withdrew the waivers in May 2020.

The waivers’ restoration comes as nuclear nonproliferation experts have grown increasingly concerned about Iran’s enrichment capacity and the lowering of its “breakout time,” the time it would take to produce fissile material for a nuclear weapon in open defiance of international safeguards.

While the current negotiations between Iran and the P5+1 in Vienna have made slight progress, Iran has continued to insist on broad sanctions relief before it returns to compliance with the deal. The United States has insisted on Iranian compliance before sanctions are removed.

“We did NOT provide sanctions relief for Iran and WILL NOT until/unless Tehran returns to its commitments under the JCPOA,” State Department spokesman Ned Price wrote on Twitter at the time of the announcement.