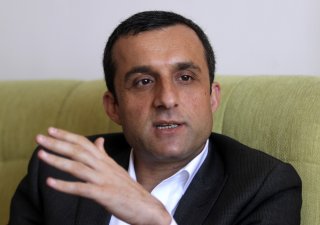 Ashraf Ghani resigned and fled Afghanistan in the hours before Kabul’s fall to the Taliban on August 15. Soon after, allegations surfaced that the former president ran off with roughly $170 million from Afghanistan’s central bank. Ghani’s departure seemed to be a turning point because soon after the Afghan National Army disintegrated and many government officials surrendered to the Taliban. Now, the internationally recognized government of the Islamic Republic of Afghanistan ceases to exist.

Amrullah Saleh, Ghani’s vice president, announced as the government of Afghanistan was collapsing that he would never accept a Taliban victory over the country. Saleh also departed Kabul ahead of the Taliban advance but did not flee the country; instead, he traveled to the Panjshir Valley, an anti-Taliban stronghold in northeastern Afghanistan that had steadily resisted the group during its 1990s conquest of Afghanistan.

Once in Panjshir, Saleh issued a statement claiming that because Ghani had resigned and gone into exile, he, as the vice president, was now the interim president of Afghanistan. Though these claims have not been formally recognized by any foreign country, the Afghan Embassy in Tajikistan recognized Saleh’s succession and devoted itself to his cause. In the week since the announcement, thousands of Afghan troops, including many units from the country’s elite Special Forces, have traveled to Panjshir to defend it against a prospective Taliban offensive.

Saleh’s history is deeply tied to Panjshir Valley. An ethnic Tajik, Saleh is a native of the valley. Following military training in Pakistan, he served in the 1990s-era Northern Alliance. In 1997, the alliance’s commander, Ahmad Shah Massoud, appointed him liaison officer for the rebel group in Tajikistan. He quickly emerged as the Central Intelligence Agency’s primary point of contact within the country, and, following the 2001 U.S.-led invasion, was appointed director of the National Directorate of Security, Afghanistan’s intelligence agency. He later served as Ghani’s interior minister before his appointment as vice president.

Right now, the National Resistance Front’s chances of survival appear tenuous at best. The 1990s-era Northern Alliance controlled much of northern Afghanistan but the current group only controls Panjshir Valley and a few surrounding districts. The valley is surrounded on all sides by Taliban territory, lacks the ability to receive supplies, and has been placed under a loose siege, which has indicated troops may be sent to recapture the area. Although negotiations are ongoing between the two sides, it is unclear what the outcome will generate.