The WHO Has Declared a Coronavirus Emergency (What Now?) 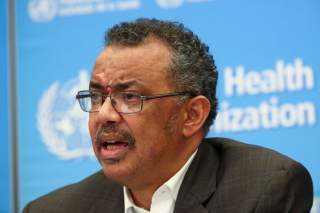 The director general of the World Health Organization (WHO) has decided the outbreak of 2019-nCoV constitutes a public health emergency of international concern (PHEIC) as more countries reported confirmed cases of the coronavirus. The move updates the organization’s decisions from last week, when it said it lacked enough scientific evidence to declare the emergency.

The WHO has declared only five other PHEICs in the past decade: the H1N1 influenza pandemic (2009-10), setbacks in fighting polio (2014), West Africa’s Ebola outbreak (2014), Zika virus (2015-2016) and the recent and ongoing Ebola outbreak in the Democratic Republic of the Congo.

Although the WHO responded to 58 health emergencies in 50 countries last year, PHEICs are a unique category of emergencies: they are defined under the International Health Regulations as extraordinary public health events that endanger global public health through the international spread of disease, and that potentially require a coordinated international response.

There have been three confirmed cases of 2019-nCoV Ontario, and one in British Columbia. Public health officials continue to stress that the risk of infection in Canada is low. So what does the emergency declaration mean for Canadians and Canada’s role internationally?

The PHEIC declaration gives the WHO more power to muster an international response to the outbreak to prevent or reduce the spread of disease. Its recommendations are not binding on member countries, but they are expected to follow them.

In this case, the WHO recommendations ask China to enhance its actions to contain the outbreak, share relevant data on cases and conduct exit screening at international airports and ports. It also recommends other countries share information with the WHO, focus on reducing human infections and inform the WHO of any travel restrictions.

The WHO has recommended nations support those with weaker health systems and accelerate the development of vaccines and treatments. Canadian scientists are already working to develop a new vaccine against the novel virus, although it likely won’t be ready for at least a year.

The IHR Emergencies Committee, which advises the WHO director general, said the recommendations should be interpreted in the spirit of solidarity and in support of China, to enhance preparedness in other regions of the world that may need additional support.

The committee has warned against any travel or trade restrictions, even as the United States has placed travel restrictions on travel to China. Canada closed its borders to people from Ebola-affected countries during the 2014-16 outbreak even though there was no scientific evidence supporting the decision, and was was criticized by the WHO for doing so.

The declaration of a global public health emergency can have serious repercussions. If it is called too early, it can interfere with international traffic and trade. But if it is called too late, the WHO may be viewed as failing to adequately protect the public’s health.

The WHO has been criticized in the past for both premature and delayed declarations of PHEICs. Some experts have said WHO was too slow in its declaration on 2019-nCoV.

The declaration is both a political and ethical decision made in a time of immense uncertainty. It must strike a careful balance between the need to curb the spread of disease and prevent unnecessary fear and interference.

What does it mean?

It does not necessarily mean the risk of infection has increased in Canada.

The WHO declared the emergency to coordinate an international response to protect countries with health-care systems that are otherwise ill-prepared to deal with this novel virus.

Despite its weaknesses, the Canadian health-care system is relatively well-equipped and prepared to address infectious disease outbreaks, particularly as a result of its experience with the outbreak of Severe Acute Respiratory Syndrome (SARS). Multiple systems exist in Canada to prevent the spread of serious infectious diseases.

Canadians should not fear 2019-nCoV simply as a result of the WHO’s declaration. Rather Canada and Canadians have an important, collective role to play in curbing the spread of this novel virus — and avoid the mistakes made in the past.

Instead, Canada can offer scientific expertise to help ill-equipped countries with surveillance and detection, and Canadians can do their part to help curb the spread of the disease by adopting common sense hygiene practices.

This article by Maxwell J. Smith and Jacob Shelley first appeared in 2020 in The Conversation via Creative Commons License.