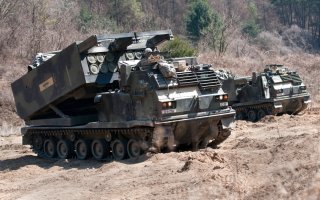 Ukraine’s use of precision-guided, land-fired rockets appears to be a key reason why Russia is making little to no progress in the eastern part of the country.

Prior to the arrival of these Guided Multiple Launch Rocket Systems (GMLRS), GPS-guided rockets that are able to travel as far as 70km and strike enemy targets with a high degree of precision, Ukraine’s military appeared unable to stop or even slow down Russia’s long-range missile and rocket attacks into civilian areas of Ukraine. Conventional artillery such as 155mm rounds fired from one of the many M777 Howitzers sent to Ukraine can travel roughly 30km, making it difficult for Ukrainians to attack Russian launch sites from safer stand-off distances or possible destroy fire bases, supply areas, and mobile launchers on the Russian side of the border.

“This (GMLRS) is a 200 pound warhead. It’s kind of the equivalent of an airstrike, frankly -- a precision guided airstrike. These are GPS-guided munitions. They’ve been very effective in hitting things that previously the Ukrainians had difficulty hitting reliably,” including command and control nodes, sustainment and logistics hubs, key radar systems and other things, Colin Kahl, undersecretary of defense for policy, told reporters on August 8 at the Pentagon.

One reason why these rockets have become so important is that Ukraine lack air superiority in the conflict. Without being able to reliably penetrate Russian airspace, there is no way to achieve this kind of large “bomb-like” effect without substantial land-fired rockets.

These systems are having a second critical impact: reigning down precision fires from greater distances can cripple an enemy’s freedom of maneuver, meaning Russia’s efforts to resupply its forces or move into attack formations are much more vulnerable to attack.

Kahl explained that GMLRS precision-guided rockets have “made it more difficult for the Russians to move forces around the battlefield. They’ve had to move certain aspects back, away from the HIMARS. It’s slowed them down; it’s made it harder for them to resupply their forces.”

These weapons have been part of the U.S. Army’s arsenal since 2007 and 2008 when land-fired precision was introduced during Operation Iraqi Freedom and Operation Enduring Freedom in Iraq and Afghanistan. Although GPS-guided bombs were demonstrated from the air as far back as the Gulf War era, land-fired precision weapons did not emerge until 2007 when the Army fielded Excalibur, a GPS-guided 155m artillery shell able to pinpoint ground targets to within a meter of accuracy. Prior to the arrival of GMLRS, Ukrainian defenders had little to no way to stop the incoming salvo of ground-launched Russian rockets and missiles which have been killing Ukrainian children and civilians for months with impunity.