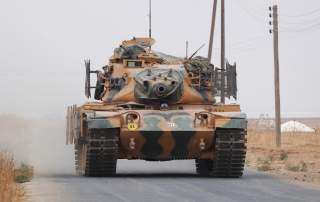 Recent events in Syria have naturally raised two questions: Who lost the country? And where might the international community go from here?

The first one is easier to answer. Looking back, Syria has probably been lost since the popular uprising in 2011. When President Bashar al-Assad’s regime stubbornly refused any effort to resolve the matter peacefully, no outside power proved willing to intervene. Instead, everyone hoped that a mix of sanctions, United Nations–led diplomacy and half-hearted attempts to support a ‘moderate’ opposition would eventually bring down the regime.

It didn’t work. Fundamentalist forces gained political ground and territory, and others, including Iranian-backed militias and the Russian military after the northern autumn of 2015, rushed to Assad’s defence. Although the regime had long deprived the Kurds in northern Syria of most of their rights, it started making concessions to them when it came under pressure. As a result, Kurdish militias abstained from challenging Assad, which led much of the broader Syrian opposition to shun them.

After Islamic State established its ‘caliphate’ in the Syrian city of Raqqa and the Iraqi city of Mosul in 2014—enabling it to strike even Baghdad—there was an understandable rush to confront the terrorist threat. In Iraq, that task fell largely to Iranian-aligned Shia militias. In Syria, the situation was more complicated. The United States had no intention of sending in its own combat forces, but it also knew that the Syrian opposition groups that it (and Turkey) had been arming were not up to the challenge. In any case, those groups were focused on toppling Assad, which had ceased to be a high priority for Western policymakers.

Given these constraints, the US threw its support behind the Kurdish People’s Protection Units (YPG). The US has long recognised the YPG as an affiliate of the Kurdistan Workers’ Party (PKK), which it, along with the European Union and Turkey, classifies as a terrorist organisation. But even if the decision didn’t fit with any long-term strategy, it satisfied short-term tactical needs, and supporting the YPG ultimately proved successful in depriving IS of its territory (though the group will remain a long-term threat).

The uprooting of IS would have been a good time to launch a political process to resolve the broader conflict. In fact, there were at least two options on the table. The first was to establish a Kurdish/YPG-governed entity in northern and northeastern Syria. But that would have raised the ire of Turkey, which was not ready to tolerate any PKK presence on its border. In addition to requiring an open-ended US military presence, this scenario would have resulted in Kurds ruling over substantial swathes of non-Kurdish territory.

The other option was to pursue a broader political settlement, with the goal of creating an inclusive governance structure acceptable to the regime in Damascus. Over time, this process could have led to an arrangement similar to that in northern Iraq, where the Kurdistan Regional Government now cooperates closely with Turkey.

But that didn’t happen. As the US position evolved, Washington rejected the first option and then actively discouraged the second, making a crisis inevitable. The trigger was a telephone call in which US President Donald Trump gave Turkish President Recep Tayyip Erdogan a green light to send forces into Syria. Trump ordered the US military to abandon the area immediately, and added insult to injury by announcing it all on Twitter, shocking both the Kurds and many of his own advisers.

Since then, everything has come crashing down. With their credibility in tatters, US officials have desperately sought to create some kind of policy out of the ruins created by the presidential tweets. The president has threatened to destroy Turkey’s economy if it does what he enabled it to do. With Kurds—most of them civilians—fleeing Turkish bombs, the UN Security Council stayed typically silent, while the Europeans condemned everything and everyone involved.

As foreign-policy disasters go, this is one for the record books. But the seeds for this larger conflagration were sown long before the now-infamous Trump–Erdogan call. Absent any coherent policy, the conditions were ripe for a crisis. The question now is whether there’s any constructive way to proceed.

For now, the US has agreed with Turkey on establishing the wide security zone in northern Syria it sought. Russia, meanwhile, has evidently brokered some sort of arrangement between the YPG and the Assad regime. With Russian and Syrian government forces now entering some of the areas vacated by the US, the Trump administration is left trying to manage its relations with Turkey. As for the EU, there’s little to be done. Having already cut off all high-level political contacts with Turkey, it is impotent in the face of this latest crisis.

Logic dictates that all of the relevant parties in the region should now sit down and try to come to some kind of agreement. In addition to the Kurdistan Regional Government, Iraq and other Arab countries, there need to be places at the table for Turkey, Iran and the Syrian government. Yes, the Assad regime is associated with a wide range of horrors and atrocities—but there’s simply no other way forward.

Regional talks certainly won’t come easy. Many parties will have to swallow hard and face difficult realities. Unfortunately, the prospect of a democratic Syria was lost years ago. The top priority now must be to restore stability and prevent further catastrophes. There are no longer any good options, if, in fact, there ever were.