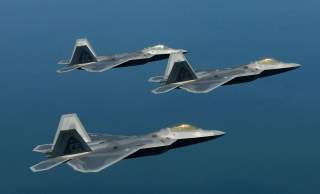 The United States Air Force has no interest in purchasing either Boeing’s advanced fourth-generation F-15X version of the aging Eagle. Nor does the service have any plans to revive the stealthy fifth-generation Lockheed Martin F-22 Raptor in either its original configuration or in a modified form with avionics from the Lockheed Martin F-35 Joint Strike Fighter. Instead the priority for the Air Force is to produce as many F-35s as it can to increase the proportion of fifth-generation fighters in its fleet while it continue to explore next-generation technologies for the future air superiority mission.

Similarly, an effort to modernize the F-22 and restart production of that "is not something we’re currently considering” either, Wilson said.

That should not come as a surprise to anyone. The U.S. Air Force has strongly resisted any effort to build new fourth-generation fighters such as new Lockheed Martin F-16s and F-15s because the service fundamentally does not believe those aircraft will be effective in combat in the coming decades. While both the F-15 and the F-16 could make use of stealthy standoff weapons to hit fixed targets inside hostile airspace, without stealth, the non-stealthy fourth-generation jets are not survivable inside areas protected by advanced enemy air defenses such as the formidable Russian-made S-400 and Chinese HQ-9.

As for a revived and modernized F-22 Raptor, a Congressionally-mandated Air Force study shows that restarting the production line would be too expensive and would take too long. “Restoring production lines, re-establishing and re-qualifying the manufacturing and supplier network, procuring critical long lead raw materials, restoring and re-training a skilled production workforce, anticipated re-design of major subsystems, and government costs,” the Air Force report states in its report.

Moreover, the Air Force is convinced that by the time that Raptor production could be restarted, the aircraft would increasingly challenged by Russian and Chinese efforts to counter American air superiority. “The timeline associated with pursuing F-22 production restart would see new F-22 deliveries starting in the mid-to-late 2020s,” the Air Force stated in its report. “While the F-22 continues to remain the premier air superiority solution against the current threat, new production deliveries would start at a point where the F-22's capabilities will begin to be challenged by the advancing threats in the 2030 and beyond timeframe.”

Also, restarting the F-22 production line would compete with the U.S. Air Force’s next-generation Penetrating Counter Air (PCA) effort to develop a successor to the Raptor. “F-22 production re-start would also directly compete against the resources necessary to pursue the Chief of Staff of the Air Force-signed Air Superiority 2030 (AS 2030) Enterprise Capability Collaboration Team (ECCT) Flight Plan, which addresses the critical capabilities required to persist, survive, and be lethal in the rapidly evolving-highly-contested-Anti-Access/Area-Denial (A2/AD) threat environment,” the Air Force said in its report.

The United States Air Force has already budgeted nearly a billion dollars to study an Air Superiority Family of Systems to replace the F-22 and the Boeing F-15C Eagle for which the service is currently conducting an analysis of alternative (AOA) for under the moniker Next-Generation Air Dominance (NGAD). The Penetrating Counter Air (PCA ) is the “air domain platform component” of a future “family of capabilities” for air superiority. But that family of capabilities is more than just the PCA aircraft itself, it includes basing and logistics, communications, intelligence, surveillance and reconnaissance (ISR), command and control, as well as other platforms and weapons—both existing and future. Indeed, for the Air Force, air superiority will likely move beyond just the realm of kinetic actions to include non-kinetic effects such as electronic attack and cyber-warfare.

Increasingly, as Russia, China and other potential adversaries advance their capabilities , current American capabilities are increasingly challenged. Thus, ultimately, the Air Force will need to develop a new air superiority fighter to maintain American military supremacy. “Our adversaries have advanced both in terms of their platform and weapons maneuverability but we have advanced too, and I think that has fundamentally changed how we will conduct air-to-air operations in the future,” explained Col. Tom Coglitore, chief of Air Combat Command’s Air Superiority Core Function Team in an interview with The National Interest some time ago.