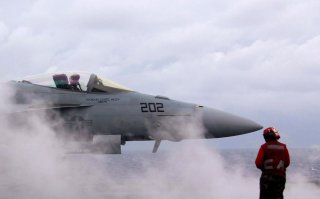 The Navy is launching armed attack planes from the deck of its USS Ford carrier to prepare the new ship for major warfare on the open seas, by launching F/A-18 Super Hornets and helicopters equipped with ordnance for combat missions.

Carrier Air Wing 8 has been operating the largest air wing embarked to date for the Ford and the ship’s first ordnance movement from a lower-deck magazine using the weapons elevators.

The exercises used 40,000 pounds of inert, or non-explosive ordnance which was transferred through an upper stage elevator before being loaded onto an aircraft.

“We’re thrilled to be here dropping light and heavy inert ordnance; but the biggest thing as the air wing commander is to do our primary mission: war at sea, air defense, air superiority and power projection. We’re taking [Ford] from carrier qualification to a mission that focuses on combat operations,” Capt. Josh Sager, Commander, CVW 8, said in a Navy report.

The first-in-class USS Ford has been specifically engineered for expanded air attack, being built with a larger deck space than the Nimitz-class to enable a greater sortie rate. Navy developers explain that the Ford configuration was developed to increase the air mission rate by as much as 33-percent, with a mind to creating a new dimension of air power projection. This strategy, initiated years ago, did seem to anticipate what could be described as a modern threat environment. More air power would be needed in any kind of major-power engagement, carriers need to have an ability to operate the first-of-its kind carrier-launched F-35C stealth fighter, and perhaps of equal or greater significance, modern carriers need to have longer attack reach.

Air attack assets such as an F-35C and upgraded F/A-18 fighters will have longer reach due to the upcoming arrival of the MQ-25 carrier-launched aerial refueler. This constitutes a substantial development, as it enables a carrier air wing to hold a country at risk for ranges out to 1,000 miles or more. Should an F-35C, for instance, have a 500 mile combat radius, it may need to turn around before reaching its destination. Should Chinese DF-21 carrier killer missiles, which have a reported range of up to 900 nautical miles, force carriers to operate at greater standoff distances, an aerial refueler could ensure that the Navy sustains an air attack capability.

CVW-8 embarked seven squadrons and is operating nearly 30 fixed-wing aircraft and both of their Helicopter Sea Combat squadrons.