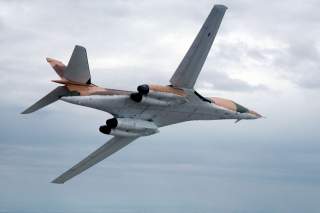 Key point: No longer an anti-Soviet nuclear bomber, the B-1 now helps against insurgencies like ISIS.

The costly new bomber featured swing wings which could sweep forward to a 15-degree angle to maximize lift during takeoff or landing, allowing the 44.5-meter long plane to operate from shorter forward airbases. To minimize drag for supersonic flight, the wings could tuck inwards to a 67.5 degree angle. At high altitude the four B-1A prototypes could achieve up to 2.2 times the speed of sound-assisted by two flexible vanes situated under the nose that help stabilize airflow.

Instead, the B-1B’s aluminum and titanium skin surfaces were reshaped and coated with radar-absorbent materials to reduce radar cross-section to just 2.5 meter, roughly that of a small F-16 fighter. Though far from being a “stealth” plane, the B-1 would not be susceptible to detection and targeting at very long range like a B-52 would be.