Why America’s Elite Bomber Force Could Not Save Afghanistan 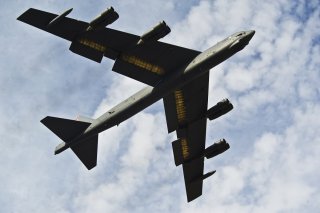 In the final scene of the Vietnam classic Platoon, the Bravo Company Commander, Bravo 6, authorizes a “danger close” airstrike on his position as a last desperate measure against being overrun by a North Vietnamese Army (NVA) nighttime attack. As Marines and Air Force heavy-lift stage a rerun of escape from Saigon and help evacuate U.S. embassy staff as well as thousands of desperate Afghans, the Pentagon last week completed what appears to be a final large scale bombing campaign using primarily B-52 Stratofortress bombers.

In an ironic twist, it was the B-52, the now almost seventy-year-old airframe, that was one of the first aircraft on the scene in Afghanistan after 9/11. As told in the book Horse Soldiers, U.S. Special Forces partnered with the Northern Alliance to call in precision airstrikes on entrenched Taliban positions in the fall of 2001. What are “precision” strikes? Don’t bombers drop dozens of bombs to saturate an area like the raids on Dresden and Tokyo in World War II? Back then yes; today, not so much at all really.

Looking past the shocking headlines as Afghanistan reverts to Taliban control, it is worth analyzing just how outdated and irrelevant the entire concept of the “bomber” actually is. Like many other pieces of military hardware, technology has rendered them redundant and irrelevant, and only the fiscal inertia of the war state propels them forward at their current scale. In addition to the B-52, the pork includes the B-2 Spirit, the B-1 Lancer, and the latest “bomber” being developed by Northrup Grumman, the B-21 Raider.

Beginning with redundant, the bombing raids of World War II were conducted with what are today called “dumb bombs.” Accuracy was a function of release point above and offset to the intended target; once released only ballistics had a say in terminal accuracy. It was simply a numbers game: in order to effectively destroy a given target, a large number of bombs would have to be dropped in order to have a high enough statistical chance of hitting it. Despite their firepower, carpet bombing with dumb bombs was notoriously inaccurate. In 1944 forty-seven B-29s raided the Yawata Steel Works in Japan, but only one bomber scored a hit, with one on its bombs.

As Vietnam came to a close, industry and defense contractors pioneered laser-guided bombs. The original dumb bombs were retrofitted with a laser seeker head and guidance fins that steered the weapon based on the reflection of a high-powered laser designator being deployed either on the ground or from aircraft. Their use in the Gulf War was a resounding success. In fact, “only about 9 percent of the munitions dropped in the Gulf War -- 7,400 of 84,200 tons -- were precision-guided, largely because stockpiles were limited. But that 9 percent was responsible for 75 percent of the damage done to strategic targets.”

Following laser bombs came precision bombs, or Joint Direct Attack Munitions (JDAM) paired to a Global Positioning System (GPS). The target location, derived from either ground-based forward air controllers or plane targeting pods, is entered into the bomb’s guidance computer and, after release, it steers itself to the location. Today, there are dozens of different kinds of smart munitions, but the vast majority of those dropped in the last twenty years are one of six types of bombs. In order of 500-, 1000-, and 2000-pound bombs, the laser-guided series are the GBU-12, GBU-16, and GBU-10 and the JDAM series are GBU-38, GBU-32, and GBU-31, respectively.

What does all this have to do with bombers and redundancy? The capability of carrying precision munitions isn’t limited to the above-mentioned bombers. The F-35 Joint Strike Fighter can carry both laser and GPS weapons, as can the ubiquitous F-18 Hornet, the F-16 Fighting Falcon, the A-10 Warthog, and many other current tactical jets in service. Even the propeller-driven AT-6, a military-grade version of the T-6 trainer, can carry both types of precision weapons. Due to high collateral damage and civilian casualties, the era of carpet bombing is long over. Now bombers use their payload capacity almost exclusively for smart weapons. The B-2 Spirit can carry eighty 500-lb GBU-38 JDAMs.

Bombers using dozens of precision weapons like this B-52 strike in 2018 are impressive indeed. But it isn’t anything that a squadron worth of tactical aircraft armed with the same weapons could also do and have done countless times in the last twenty years. The point is that no matter what airframe the smart bomb falls from the same motto holds true for precision weapons: one target, one bomb.

Where current tactical aircraft lag considerably compared to bombers is range. As demonstrated in Kosovo under Operation Allied Force in 2000, six B-2 Spirits flew from their home base in Missouri to the Balkans and back to drop the opening bombs of the operation (refueling with tankers when needed). Possibly seeing the writing on the wall, all U.S. Air Force bombers were incorporated into Global Strike Command in 2009.

Having the capability to play global whack-a-mole on a moment’s notice is definitely a tool worth keeping on hand. But how many bombers are required to do this? The Air Force plans to buy around 100 B-21 Raiders at $550 million per plane to replace the B-2 Spirit and B-1 Lancer, complementing about fifty-eight current B-52s in service. Recall the B-2 was originally pared down from 132 planes to twenty-one due to cost overruns and, more sanely, the end of the Cold War. But the New Cold War with Russia and China has provided the casus belli for the current scale of the bomber force. Lieutenant General David Nahom, Air Force deputy chief of staff for Plans and Programs, called near-peer competition the “driving force” for a two-bomber fleet.

The convenience of planning for a big war then leads to the irrelevance of the bombers’ other trump card: nuclear strike. With the capability to launch nuclear weapons in intercontinental ballistic missiles (ICBMs) or from Ohio-class boomer submarines, the days of air-delivered nuclear weapons are clearly nothing more than nostalgia for Strategic Air Command, which was decommissioned in 1992. The thought of U.S. bombers in 2021 flying nuclear missions against near-peer competitors who also have similar weapons to retaliate is the final hilarious culmination of mutually assured destruction.

Finally, precision weapons have proven difficult to use precisely in low-intensity conflicts when the enemy and populace are hard to differentiate. As reported by Glenn Greenwald, during a five-month period in Afghanistan, nine out of ten persons killed by drone Hellfire missiles were not the intended targets. And smart bombs are only as smart as the coordinates they attack. Entering friendly GPS positions as target positions results in predictable fratricide. Modern “bombers” are nothing more than strategic-level precision weapon pack mules.

It is now obvious the United States will take an official loss in Afghanistan. The technological marvels unveiled in the First Gulf War including the precision weapons that were supposed to transform warfare into simply pushing buttons were soundly defeated by sandals, superior will, and AK-47 rifles. As America reassesses its missions and military following this loss, it would be prudent to significantly downsize the bomber force to a scale that matches today’s technological and strategic realities.

Jeff Groom is a former Marine officer. He is the author of American Cobra Pilot: A Marine Remembers a Dog and Pony Show.