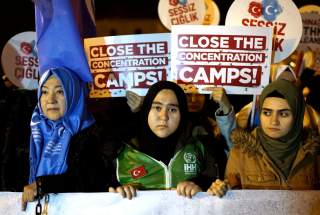 A 403-page report by New York Times detailing China’s pressure campaign on Muslim ethnic minorities in the province of Xinjiang means that concrete evidence is leaking contary to Beijing’s attempts at disinformation. The United States should focus on not only refuting China’s denials of re-education camps for alleged “terrorist” Uighurs, but also make an official statement about the Chinese Communist Party’s (CCP) disinformation campaign and censorship. Moreover, America should not limit itself to address each fragment of evidence, but create a counter-campaign. It is in the national interest of the United States to do so and would promote justice for three reasons.

To begin with, America’s statements can clearly remove any justifications China will use to refute such claims. Until now, China has refuted the human rights situation in Xinjiang by limiting freedom of the press and disseminating disinformation across the world. But, Beijing cannot give a good reason why they don’t allow the reporters into Xinjiang or why China’s state-media and foreign non-state-media report about the Uighurs in different tones. China’s press control and disinformation campaign are visible and verifiable facts—not something speculated. Xinjiang is actually a media-controlled area. For instance, Olsi Jazexhi, a Canadian-Albanian historian, and other reporters who covered the situation of Xinjiang testified that a Chinese official named Mr. Li threatened them not to report anything negative about China during their pre-arranged “visit” to Xinjiang.

Also, the obvious disparity between China’s state-media and foreign non-state-media the coverage from outside is also evidence of the CCP’s disinformation. In China’s state media, the words Uighur and Xinjiang are inaccessible search terms. If you search Xinhua, a Chinese state-owned telecommunications company, you'll see a window saying “the request contains sensitive words.” In contrast, take a look at China Digital Times, a Chinese news site based in Los Angeles to report blocked or deleted news by China’s state. Most of the articles listed under the term Xinjiang are about censorship or human rights in the Uighur regions. As, Declan Ganley, CEO & President of Rivada Network, told the German Marshall Fund (GMF), the “Uyghur situation is a very good example of how disinformation has been so powerful of China, I mean there is obviously massive disinformation campaign.”

Furthermore, all of this means that the United States has no excuse for misunderstanding what is happening in Xinjiang. Already, Washington has engaged Beijing on Uighurs’ human rights during the U.S.-China trade war. If America strongly criticizes and focuses on the Uighur situation, Beijing will have two options. The CCP could totally open the Xinjiang area to the press, or they could just keep blocking access to the region while claiming it is already open to visits or that allowing reporters would harm China’s security. If China doesn’t lie and doesn’t use disinformation, Beijing will choose the former option and the truth will be uncovered. However, as we see, China will certainly stick with its disinformation and claim those lies are true. If China chooses this latter course, it is a contradictory argument because Beijing only allows reporters to cover a limited area of Xinjiang and interview only selected Uighurs. Even if China chooses neither option, it will still have the trade war to deal with and its own self-made trap.

By making an accusation that China cannot refute, the United States can prove they are not engaging in their own disinformation or using the Uighur situation for advantage U.S.-China trade war. But actually, China’s brutality would work to Washington’s advantage. For example, Lousia Grever, the director of external affairs at Uyghur Human Rights Project, told the GMF that “China’s disinformation will impact on U.S.-China war” because it will further prove to the international community that China is untrustworthy.

Lastly, action on the Uighurs will show America working for the benefits of Muslims and will help with Washington’s Kurd situation. The United States is being criticized by the international community for allowing Turkey’s armed action against America’s Kurdish partners—partners who have sacrificed a lot fighting with ISIS. At the same time, Turkey is turning a blind eye to the issue of Uighur human rights abuses due to China’s disregard for Ankara’s actions. Supporting the Uighurs and criticizing China’s censorship of Islamic culture and disinformation that Uighurs are terrorists will not totally excuse Washington from critics. But, action on the Uighurs will help America be seen in a better light in the Middle East. At the same time, the United States should criticize Turkey’s indifference to the Uighur crisis and occupation of Kurdish-held areas. For instnace, Ganley mentions that “It is about Muslims but Muslim countries don’t speak out. They should talk loudly, such as Turkey or Pakistan…”

Actually the United States is supposed to support and protect dangerous or weak areas—such as civilians in Syria—for the international order, but China, as a rising hegemon, oppresses its own citizens rather than protecting anyone. Pointing out intelligence information on the Uighur situation can put pressure on China and Turkey simultaneously. Also, America can show a sense of solidarity to the Middle East countries. As, Ganley said “China doesn't want diversity. They don’t want ethnic minorities to have their differences and they want uniformity of thought, ideas, and actions.”

Washington should take a center stage and point out the epicenter of conflict—China’s press control and disinformation. Already some European countries show support of Americans’ reactions to the New York Times report. The United Kingdom’s Foreign Office stated that “The UK continues to call on China to allow UN observers immediate and unfettered access to the region.” Also, Germany’s Foreign Minister Heiko Maas backed the call for China to allow international access to Xinjiang from the UN Human Rights Commission. Furthermore, in a UN Human Rights Commission meeting, London commented on China’s repression of Uighurs on behalf of twenty-three countries. (Although, thirty-seven countries still support China and insisted China’s human rights have improved and this is taking action to prevent terrorism). This means that America must pursue these countries and bring them away from China.

As a result, the United States would hold greater importance in the Uighur situation and will further consolidate American leadership. Washington must state the facts and evidence without any mistakes. America should make clear China’s contradictions and disinformation. Doing so would be helpful not only to the U.S. national interest but also solving the problem and achieving justice for the Uighurs. It can be one of the ways to deal with America’s poor reputation in the Middle East. Washington should not miss this golden opportunity of strongly showing the contradictions and disinformation used by China.

Hyunmu Lee recently served as an Asan Fellow at the German Marshall Fund of the United States.