Why America Must win the Race to 5G 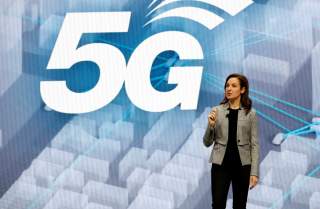 The United States has entered another technology duel on par with the space race—the race for the 5G network. It will revolutionize digital interconnectivity through enhanced data processing and storage capacity. The Chinese technology giant Huawei is capturing the 5G telecommunications equipment industry worldwide. Huawei promotes contracts covering every aspect of the 5G network from financing to installation. The United States is concerned that the company’s growth amplifies China’s political sway and brings security vulnerabilities.

Huawei is subservient to the communist government under Chinese law. Multiple governments have indicted Huawei for espionage, theft, bribery, and corruption. The United States has added to these charges obstruction of justice, fraud, and illicit sales to the rogue regimes of Iran and North Korea. As the West and China haggle over the 5G market, several nations face a telling choice. To meet the 5G challenge, the United States should negotiate trade agreements on end-to-end 5G services, create supply chains for upcoming virtualized 5G networks, support alternate suppliers, and invest in domestic research to dampen Huawei’s expansion.

Through partial trade agreements on end-to-end 5G services, the United States. can empower partners such as Sweden, Finland, and Japan that have equipment providers that rival Huawei. Furthermore, plurilateral trade agreements that forge supply chains for a virtualized 5G network will enrich and extend trade relations. Within the next five years, the 5G network will morph into a software-based system that surpasses Huawei’s hardware-based model in functionality, performance, and permanence. The United States can orchestrate this transition by brokering valuable commodity chains in advance.

American policy should also include robust investment in domestic research. Because China recognizes that innovation is key to American power, it is feverishly outspending the United States in 5G technology. Research is the source of innovation, a magnet for foreign investment, and an important bridge between countries. Therefore, it will be a determinant in the 5G race.

A policy that champions trade agreements and domestic research to counter Huawei will succeed for three reasons:

Second, trade agreements and domestic research establish American leadership. With salutary trade conditions, the United States can regain market power in the long term and reorient the 5G market toward its offerings which are integral to virtualized 5G networks. American research contributes to leadership by allowing the United States. to institute standards and shape ancillary product development. Innovation in virtualized network technology presents an excellent prospect for leadership through research. Even states that select Huawei as a vendor, such as the United Kingdom, concede the risks attached to Chinese technology. The United Kingdom anticipates virtualization will be a hedge against its gamble. If the United States can fill this security gap through virtualized technology, it can win the confidence and commerce of other nations.

Others might argue that bypassing Huawei in trade agreements will set the U.S. further behind in the technology race. However, in comparison to Huawei, American-endorsed suppliers such as Ericsson, Nokia, Samsung, and Qualcomm have more substantive patents and match Huawei’s capability. There are ample opportunities for the U.S. to regain momentum. Core 5G applications have yet to be released, and the United States has the skilled labor to develop them. Moreover, virtualized network architecture plays to American strengths in software, semiconductors, cloud sharing systems, and advanced computers.

Like its predecessor, the race for 5G network deployment has implications for U.S. security, influence, and prosperity. As signals crisscross the world, they will affect the contours of the international order. They will cede power to states that fashion them into systems advancing their national interests. Trade and innovation are instrumental in America’s ability to inspire allies to look beyond Huawei’s instant benefits toward more profitable future partnerships with the United States.

Elizabeth May is pursuing a Master of Arts in International Affairs through the Elliott School at George Washington University.