Why America Needs a Presence on the Moon 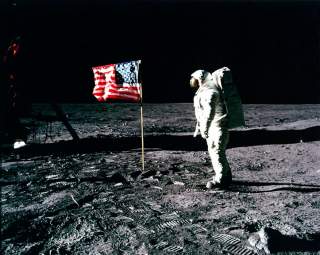 It’s time for the United States to pay attention to China’s activities on the Moon. The reason isn’t what you think—it’s not about who gets humans back to the moon first. Instead, it’s about who gets the key real estate and water.

Fifty years ago, Buzz Aldrin described his landing spot at Tranquility Base as “magnificent desolation.” To the Apollo astronauts, there wasn’t much on the Moon other than rocks and dust.  This explains why the United States rapidly lost interest in funding manned lunar missions after beating the Soviets to the landing in the summer of ‘69.

Then, about a decade ago, a NASA probe discovered water on the Moon’s poles. This discovery was a big deal because it has potential to change all we know about spaceflight economics.

It is expensive to go into space, even with the advantages granted by reusable first stages, because it takes a lot of fuel to climb out of the earth’s gravity. Apollo missions required a massive rocket, weighing about 6,500,000 pounds at launch, to place two men on the Moon in a lunar lander weighing about 15,000 pounds at touchdown. The difference in weight consisted mostly of fuel and tanks.

However, if fuel can be made from frozen water at the Moon’s poles and then moved into low, medium or geosynchronous earth orbits, everything changes. Satellites can be refueled in space, requiring smaller rockets to place them into orbit. Routine travel to the Moon from a space station becomes practical. Missions to Mars become affordable. Most importantly, it may become economically viable to mine near-earth asteroids, potentially unlocking literally quintillions in resources, an economic bounty unmatched in human history.

The key terrain at these polar locations is incredibly small.  While the lunar North Pole has some water, most is located at its South Pole in deep craters free from sunlight.  To make fuel, processing equipment must be installed on two or three crater tops exposed to the sun, the largest of which is only a few football fields wide. Thus, these crater tops may become the solar system’s most exclusive addresses.

If the Moon does open to fuel production, several other points become strategically important. The first are the so-called Lagrange Points in cislunar space where the relationship between Earth and Moon’s gravity allows a spacecraft to park in one spot.  These points could serve as transfer hubs for fuel shipments to earth orbit or could be used for military purposes to control earth orbits or lunar transit routes.

To effectively leverage these points, spacecraft need power. Large amounts of power can be generated and beamed to the Lagrange Points from a few locations at the Moon’s central latitudes. Thus, holding positions at both the Lagrange Points and at the right lunar locations enables anyone to control access to the Moon who wants to do so.

So why worry about China’s actions on the Moon?

The problem is there are no territorial or legal ownership rights on the Moon under international law, which is governed principally by the 1967 Outer Space Treaty. Presence may be tantamount to possession of a locale. NASA may have reinforced this doctrine inadvertently by declaring a 1.2 miles buffer zone from the Apollo sites to protect their historical significance. The status of water and resource rights is also ambiguous under the treaty. Ownership of in situ lunar resources is not allowed, but exploitation of these resources is. Thus, whoever lands first on the south pole’s key crater tops could declare a safety buffer (to protect scientific instruments, perhaps) covering the entire usable real estate. This presence, in turn, unlocks access to the water. While militarization of the Moon is prohibited, nothing prevents support activities like power beaming which could enable militarization of the Lagrange points.

China has made no secret about its intentions on the Moon. While the United States celebrates its lunar history with the fiftieth anniversary of the Apollo 11 landing this year, China is celebrating its contemporary accomplishments.  China recently landed a lunar probe on the Moon’s far side. This is technically difficult because it is out of sight of the earth and requires a series of support spacecraft to relay data. Landings like this show China’s readiness to land on South Pole crater tops.

The United States is not behind China in space in any way, it just isn’t leveraging its advantage. The science mission of NASA has long eclipsed its original competitively-oriented mission. Why land on the lunar south pole (which NASA’s canceled Resource Prospector mission could have done) when you can land on Mars? That is, until one realizes, that landing on the lunar south pole unlocks the way to get to Mars affordably and, potentially, to generate huge wealth.

Presidents and Congress continue to call for and NASA continues to invest billions in an Apollo-style return to the Moon.  But the 1960s lunar competition was about landing first. The coming competition with China will be about position and resources.

Thus, instead of a government agency leading the charge, it is time for the administration and Congress to finally free the private sector to do what it does best—developing and exploiting markets. Over the past decade, the private sector has led the way in space innovation by pioneering advances in booster reusability, new fuels and engine designs, and satellite capabilities to dramatically reduce the cost of space access and on-orbit operations. The government still has an important role, however, in incentivizing lunar investment; developing legal frameworks to support commerce on the Moon; providing logistics for launch, navigation and communication at lunar distances; and providing protection to U.S. commercial operations on the Moon, if needed.

But a U.S.-flagged payload needs to land on the lunar south pole crater tops—soon! Non-traditional commercial space launch companies may offer the means to get back to the Moon faster and cheaper than NASA, which will spend $3.68 billion dollars this year alone on the Space Launch System for missions that will not go to the Moon for years.

The United States has a chance to establish a strategic presence on the Moon’s key terrain before others do. The question is whether will we get out of own way to do it. Time is running out.

Harry Foster is a retired Air Force officer, former director of the Blue Horizons Program at Air University, and is currently a vice president at the Telemus Group.