Why America Is Ramping up Its Production of Patriot Missiles 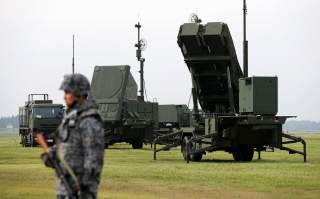 Key point: In 2018, orders for the PAC-3 increased and so production was raised.

The U.S. defense firm Lockheed Martin is preparing to massively increase production of its most advanced Patriot missile defense system.

On July 11, Defense News reported that Lockheed is planning to double production of its Patriot Advanced Capability-3 Missile Segment Enhancement (PAC-3 MSE) to meet current orders and future needs for the U.S. Army and U.S. allies.

The new production goes beyond what countries have already ordered. Lockheed intends “not just [to] account for full-rate production of the missile,” Defense News reports, “but to increase the stockpile on hand as operations overseas continue to eat up the inventory.”

To meet the incoming deluge of orders of the PAC-3 MSE, Bob Delgado, director of international business development for integrated air and missile defense at Lockheed Martin, told Defense News that the company is no longer selling any more of the original PAC-3s, but it will produce additional ones for an existing customer.

Lockheed has every reason to think there will be more orders for the MSE pouring in, given the emerging missile threats around the world. Moreover, the company has already received some sizeable orders for the PAC-3 MSE, especially from America's European partners. Poland leads the way in this regard with plans to purchase 208 Pac-3 MSEs. It is followed by Sweden, which is buying 200 MSEs, and Romania's order of 168 missiles.

The U.S. Army dwarfs these countries' interest. As Defense News points out, the army initially intended to buy around 95 missiles each year between fiscal year 2018 and fiscal year 2022.

So far, it has dramatically overshot those targets. In FY2018 it purchased 240 and will buy another 240 in FY2019 pending Congressional approval. Currently, the Army's "base orders" for FY2020 and FY2021 are already at 160 missiles.

There are plenty of other countries out there that may purchase the PAC-3 MSE. The Japanese Defense Ministry’s proposed budget includes funding for MSE upgrades to its existing PAC-3 systems. Some reports have also suggested Japan wants to wrap up that deal in time for the Summer Olympics in Tokyo in 2020.

South Korea is another customer. In February of this year, Seoul’s Defense Acquisition Program Administration’s executive committee approved a plan to spend $53 million purchasing an undisclosed number of MSEs.

“This procurement plan is aimed at acquiring more PAC-3 precision-guided missiles to respond to North Korea’s ballistic missile threat in a more effective way,” DAPA spokesman Kang Seok-hwan said at the time. A contract is expected to be signed before the end of the year, and Seoul hopes to receive the first MSEs around 2020.

The PAC-3 is an upgraded version of America’s Patriot missile defense system. The Patriot system was initially designed to defend against aircraft. When the United States encountered a SCUD missile threat from Saddam Hussein’s Iraq in Desert Storm, however, the Army began using the earlier Patriot systems to deal with a missile threat.

The PAC-2 systems used against Saddam's military had only limited success, so the United States began trying to optimize the system to deal with the growing number of short-range ballistic missile threats. This led to the PAC-3, which first came online around the turn of the century (there were previous configurations in the mid-to-late 1990s).

Besides the launcher itself, each Patriot system comes with an AN/MPQ-53 phased-array radar to track threats; an AN/MSQ-104 Engagement Control Station (ECS) to fire the interceptors; and 150 kW diesel powered generator units.

One of the significant differences between the PAC-3 and the early Patriot systems is the former uses hit to kill technology to eliminate threats. The PAC-1 and PAC-2's missile detonate in the vicinity of the threat to destroy it.

Another significant change was that the PAC-1 and PAC-2 systems were limited to four interceptors for each launcher. By contrast, the PAC-3 fitted sixteen interceptors per launcher.

The PAC-3 MSE now seeks to further bolster the Patriot missile defense system, most notably by increasing its range.

Zachary Keck (@ZacharyKeck) is a former managing editor of The National Interest. This first appeared in July 2018.