Why America Should Pay Attention to This Chinese Navy Ritual 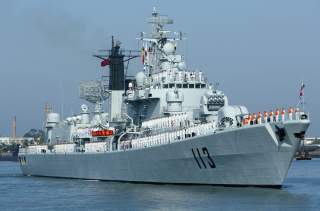 Shen and Qin made four calls on that day; but they should have made a fifth. Chinese reporting on the VTC excludes any mention of Task Force 171 (i.e., the 27th escort task force). It comprised three vessels—the destroyer Haikou, the frigate Yueyang, and the supply ship Qinghaihu. In the second half of January 2018, after making port visits to Tunisia and Algeria, Task Force 171 passed through the Strait of Gibraltar before navigating south along the west coast of Africa. On February 7th, the warships held anti-piracy exercises somewhere in the Gulf of Guinea.17 Reporting on Task Force 171 then went quiet for 12 days, until February 19, when the ships arrived in Cape Town, South Africa, for a two-day port visit. This timeline indicates that when Shen and Qin made their calls on February 12, Task Force 171 was somewhere in the South Atlantic.

Shen and Qin almost certainly called Task Force 171—why would they exclude them? But if so, why choose not to publicize the call? There is no clear answer. Was the mere presence of the task force in the Atlantic judged too sensitive? Unlikely, since this was not the first time that PLAN ships had been there. Just six months earlier, Task Force 174 took the long way home from the Baltic, where it had held exercises with the Russian Navy.18 In mid-August 2017, it conducted simulated “missile attack exercises” somewhere in the Atlantic.19 But its activities were only publicized in the PLAN press, not the wider media, as New Year’s salutations always are. Perhaps the problem was that allowing press coverage of the VTC would require that PLAN leaders publicly explain what the task force was doing in the Atlantic, and why.

February 2, 2019 was a very busy day at the PLAN Operations Command Center. On the eve of the lunar holiday, Shen Jinlong and Qin Shengxiang called five different Chinese task forces operating abroad. Only one anti-piracy escort task force was on their list—the 31st. The 30th escort task force had arrived in Qingdao on January 27, just in time to celebrate the Lunar New Year. As in 2018, Shen and Qin called the Spratly Garrison and the PLAN’s base in Djibouti. However, for the first time in PLAN history, two task forces conducted far seas training deployments during the Spring Festival. The first comprised a task force led by the East Sea Fleet destroyer Zhengzhou. Chinese press coverage did not indicate where Task Force 151 was, or what it was doing.

The Chinese media did cover the movements of the other far seas training task force then at sea. Task Force 174 left Zhanjiang, Guangdong on January 16. It comprised the destroyer Hefei, frigate Yuncheng, LPD Changbaishan, and supply ship Honghu. When Shen and Qin contacted them, they were not in the Philippine Sea, but somewhere in the Central Pacific—that is, somewhere in the vast expanse of ocean between Guam and Hawaii.

Also new, the Chinese press described Task Force 174 as a “far seas joint training task force” (远海联合训练编队). It was working in conjunction with other services under the Southern Theater Command—the PLA Air Force, PLA Rocket Force, and the PLA Strategic Support Force. Official Chinese media sources revealed that one of their aims was to “explore methods and approaches for building joint operations combat capabilities to win modern war at sea.”

The information shared in the PLAN’s annual New Year’s greetings does not account for everything the service is doing abroad. The case of Task Force 171 proves that. These short news reports tell us nothing about the expansion of Chinese submarine operations into the Indian Ocean. Nor do they acknowledge other naval activities best kept secret, such as intelligence collection and hydrographic surveys.

Still, the short history of China’s Lunar New Year’s deployments tells us much about the key events in China’s rise as a global naval power. This history shows a growing emphasis on both the combat and non-combat elements of China’s far seas naval strategy. It highlights the geographic expansion of China’s overseas deployments—where once Chinese ships were concentrated in the northwest Indian Ocean and the Philippine Sea, they now operate as far away as the Atlantic Ocean and the Central Pacific.

In the year of the snake, China’s far seas force structure comprised small task forces largely reliant on at-sea replenishment and the expensive hospitality of foreign ports. In the year of the pig, it included significant shore-based infrastructure, including the country’s first—but not last—overseas military base in Djibouti and colossal new installations in the Spratly Islands. This chronicle of the PLAN’s New Year’s deployments also shows how China’s growing emphasis on jointness is affecting naval operations abroad, and informing Beijing’s preparations for high-end conflict at sea. All of these things have happened in a single decade.

This history is far from over. By all accounts, the Chinese Navy has a long way to go before fully realizing its nautical ambitions. Xi Jinping has told the PLAN to set its sights on becoming a “world-class navy” by mid-century. What that means is impossible to tell. The PLAN has not shared its benchmarks for success. What is clear is that the decisions of PLAN commanders on the eve of each Lunar New Year will continue to serve as a useful gauge for progress in this journey, wherever it ends up.

Ryan D. Martinson is a researcher in the China Maritime Studies Institute at the U.S. Naval War College. The views expressed are those of the author and do not reflect the official policy or position of the U.S. Navy, Department of Defense or the U.S. Government.