Why America Shouldn’t Stop at the Moon — or Mars 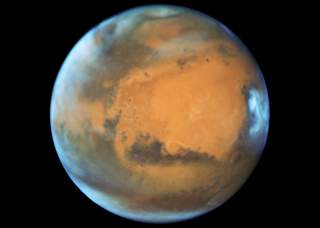 A half century after Neil Armstrong stepped onto the lunar surface, the moon landing remains both a monumental achievement for humanity and a powerfully resonant symbol of American greatness. If you have any doubts of the latter, just watch a bunch of political campaign ads. Images from the Apollo 11 mission often serve as visual shorthand for the nation’s technological prowess and can-do spirit. Now mix in some quick-cut World War Two footage (US troops marching through Paris, the Iwo Jima flag raising), lay down a Hans Zimmer-esque score, and the result looks a patriotic mini-blockbuster directed by Michael Bay.

So it’s not surprising that when politicians want to appear as visionary leaders and make a visceral appeal to voters, their eyes turn back to the skies. America’s three most recent presidents, despite many philosophical differences, all agree that putting an American on Mars is an important national goal. In his recent Fourth of July speech, President Trump told the crowd that “we’re going to be back on the moon very soon, and, someday soon, we will plant the American flag on Mars.” And while Democrats in attendance might have hated that Trump was speaking at all, they probably liked the idea. A recent Gallup poll finds support for a Mars mission is rising, with 53% in favor and both parties equally supportive.

Okay, then, let’s return to the moon and build a permanent base there. And then proceed to Mars and build one there, too. But our ambitions shouldn’t stop at the Red Planet, or even in our Solar System. The stars should be our destination.

And as it happens, there are some well-financed folks already trying to get there. The Breakthrough Starshot initiative is a $100 million R&D program — Facebook’s Mark Zuckerberg is on the board — that’s trying to build proof-of-concept spacecraft for an interstellar journey to Alpha Centauri, the next solar system over and home of possible Earth-like planets. The ultimate goal is a fleet of tiny explorers that could use laser-pushed lightsails to reach 20% of the speed of light for a 20-year journey. (Apparently the physics all work.) While the organization’s other programs are trying to develop technologies to detect and analyze other Earth-like planets in our cosmic neighborhood, Starshot could beam back images.

Of course, moving beyond proof-of-concept might well require government money. That could especially be the case if we want to accelerate the program. And there’s good reason to. In October 2017, astronomers in Hawaii detected something that astronomers had never detected before: an interstellar object passing through our Solar System. Something from out there — really out there — was zipping through our planetary neighborhood at nearly 200,000 miles per hour. Scientists at the University of Hawaii dubbed it “Oumuamua” — Hawaiian for scout.

But what is this unexpected and oddly shaped guest, exactly? Asteroid? Comet? Maybe Oumuamua is something else entirely. In a co-written paper last year, Avi Loeb, a theoretical physicist and the chair of Harvard University’s astronomy department, theorized that Oumuamua could be of “artificial origin … a lightsail, floating in interstellar space as a debris from an advanced technological equipment … [or maybe] a fully operational probe sent intentionally to Earth vicinity by an alien civilization.”

One way to better determine whether Oumuamua is natural or artificial is to go take a look. Breakthrough’s mission should become America’s mission. Now this isn’t a trillion-dollar ask. Loeb estimates that the cost of an Alpha Centauri mission, pricer than chasing down Oumuamua, would be similar to that of big science projects such as CERN and the James Webb Space Telescope, the planned 2021 successor to the Hubble Space Telescope. So figure $10 billion to $13 billion, give or take. That’s a lot less than the Apollo mission but pretty pricey when compared to NASA’s current $21 billion budget. And that tab would be in addition to the new moon and Mars missions, which are already facing budget issues.

But it’s something America can easily afford if we choose to. Finding life, much less intelligent life that could build an interstellar probe, would be the greatest-ever scientific discovery. It would also help future presidential candidates freshen up those ads.