Why America's Plan for Iraq Is Falling Apart 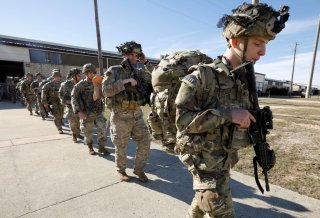 By tightening the screws on Iran’s regional proxies and energy sector, the United States risks damaging its remaining ties in the Iraqi government. Pentagon documents leaked in late March show an internal debate within the U.S. military over whether to escalate against Iran-backed Iraqi militias, which have recently ramped up their attacks on nearby U.S. and U.S.-allied targets in the country. Then, on March 26, the United States granted Iraq its shortest sanctions waiver yet for Baghdad to continue purchasing crucial Iranian natural gas exports without facing Washington’s financial wrath. These efforts are aimed at squelching Iran’s economic and military influence in Iraq, which the United States perceives as key to ensuring Iraqi stability under a U.S.-friendly government. Though doing so at a time when the economic blow of COVID-19 and low oil prices is threatening to already rip Iraq’s government apart at the seams could ultimately undermine this goal, and in turn, the U.S.-led fight against global terrorism.

The United States views containing Iraqi militias — especially those with the closest ties to Tehran, such as Kataib Hezbollah — as ultimately combatting Iran’s rivaling influence in the region. But degrading the influence of Kataib Hezbollah, or any other paramilitary organization in Iraq, is exceptionally challenging. Though their degree of public support varies across the country, these militias are deeply enmeshed in Iraqi politics and society, and have become a fundamental component of the Baghdad’s security forces and government over the years. This means that the government endures a political cost each time the United States attacks a militia group.

Despite U.S. pressure, there is also little the Iraqi government can do to more tightly control the actions of Iran-backed militias, which will continue to fight for their own survival and territorial goals beyond the direction of Tehran, let alone Baghdad. Attempts to rein in Iraq’s many powerful militia groups could also further complicate the ability of Adnan al-Zurfi, the country’s relatively U.S.-friendly prime minister-designate, to form a government by stoking pro-Iran parties to only further argue against his formal installation.

It is thus perhaps no surprise that the Iraqi government, which has been in a precarious position since the prime minister resigned in October 2019, has issued increasingly defensive statements in response to the United States directly bombing militia groups and continuing to threaten sanctions. Meanwhile, Washington is repositioning its military forces in the country with the long-term goal of an eventual drawdown, prompting mixed reactions in the Iraqi government. Those close to Iran celebrate it, while those closer to Washington fear the opportunities a lighter U.S. presence could provide the Islamic State and other terrorist groups.

The continued threat of U.S. sanctions, in particular, also risks further destabilizing Iraq’s already fragile economy, which is facing its own profound struggles due to the COVID-19 pandemic and the oil price downturn. For years, the United States has been pressuring Iraq to wean itself off of Iranian energy supplies. But Washington recently increased this pressure by shortening the latest sanctions waiver period to only 30 days before it supposedly begins sanctioning Iraq’s imports of Iranian natural gas. This is likely an effort to force Iraq to show that it has made good-faith progress on its stated goal of replacing all of its Iranian exports over the next three years, especially given that Iraqi consumption of Iranian gas imports actually increased from 24 percent to 31 percent between 2018 and 2019.

Significantly reducing this consumption, however, will require massive international investment, as well as increasing Iraq’s capture of flared gas to better economize and utilize its own domestic production. And now, the dual economic shocks of the COVID-19 pandemic and the low oil prices spurred by the recent collapse of OPEC+ cooperation will make completing such an economic overhaul on such a short timeline all but impossible for Baghdad. Despite exporting roughly the same amount of oil, Iraq earned roughly $2 billion less in revenue on its oil shipments in March than it did in February, underscoring how shocks to global oil demand due to the COVID-19 crisis are further straining Iraqi’s financial reserves. With no immediate end in sight to the pandemic and the related economic impacts, the ongoing global health and economic crisis is threatening the Iraqi government’s very ability to keep its budget balanced and its essential government services running, let alone its ability to make deep structural changes to its energy and electricity sector.

Adding to the Chaos

Yet while the COVID-19 pandemic is likely to deal a sharp blow to Iraq’s economy, concerns about containing the country’s own outbreak are also offering Baghdad a temporary reprieve from the recent wave of heated anti-government protests. With more people staying home for fear of contracting and/or spreading the disease, far fewer Iraqis have taken to the streets in recent weeks to voice their grievances with Baghdad. But after the immediate health crisis begins to wane, and as Iraq’s typically severe water and electricity shortages once again emerge over the summer, the demonstrations are all but certain to return. And if the United States intensifies its bombing campaign against Kataib Hezbollah or other Iran-backed Iraqi militias, it could risk yet more protests in Iraq by fueling anger among Iraqis tired of being caught between the crossfire of the United States and Iran’s proxy battle.

Opting to ramp up the pressure at a time when Iraq is already grappling with such extreme economic and political risks could thus very well backfire on the United States by making Iraq not only a less receptive partner in the U.S. fight to contain Iranian influence, but an overall less compliant ally in the enduring global counterterrorism fight, of which Iraq remains an epicenter.

The U.S. Strategy in Iraq Could Come Back to Bite is republished with the permission of Stratfor Worldview, a geopolitical intelligence and advisory firm.