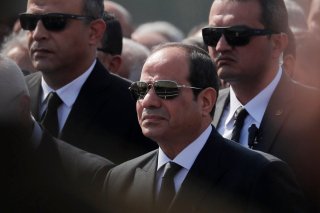 Around the world, authoritarian governments are exploiting the global COVID-19 pandemic to crackdown on dissent and suppress their political enemies. From the Nile to the Dnieper, strongmen are shuttering opposition offices, silencing journalists, and banning public demonstrations at crucial moments—often under the guise of public health.

Russian President Vladimir Putin, engaged in a game of constitutional hopscotch since he began work on nearly 400 amendments to the nation’s governing document, surprised observers in March when he backed a change that would allow him to stay on as president for another sixteen years.

Critics were outraged at this attempt to stay in power longer than Joseph Stalin, filing protest permits in Moscow on March 10. Later that day, Moscow Mayor Sergei Sobyanin banned large public gatherings, citing fears of the novel coronavirus. Putin’s constitutional changes were rubberstamped by the Russian parliament the next day, unchallenged in the streets.

The government of Jordan banned the printing of newspapers this past week, with Minister of State for Media Affairs Amjad Adaileh saying at a press conference that, “they help the transmission of the pandemic.” The presses have quieted ever since.

Azerbaijan’s president, Ilham Aliyev, has blatantly shut down the offices of an opposition group, claiming that these gatherings could help spread the virus—an initiative viewed skeptically by groups like Popular Front Party, whose office exploded in 2014 before being swiftly demolished by the government.

Aliyev took an even more dangerous step on March 19, announcing that he may start “isolating” opposition leaders—not because of public health concerns, but because “[w]e cannot allow the anti-Azerbaijani forces, the fifth column, national traitors, taking advantage of this situation, to commit any provocation.” Aliyev’s announcement isn’t idle talk: in 2009, he had two opposition leaders imprisoned for appearing in a satirical YouTube video. Be it paranoia, fearmongering, or just plain dishonesty, detaining “national traitors” who advocate for democratic reforms is nothing short of brazen and authoritarian opportunism.

Egypt’s dictator, Abdel Fattah el-Sisi, who rose to power in a 2014 military coup, has overseen the same types of authoritarian secrecy seen in China in an effort to hide the extent of COVID-19’s spread in the country. Egyptian authorities have arrested at least seven people accused of “circulating rumors” by spreading information about the number of coronavirus infections there.

Authorities stated two recent arrests were made because the people were “claiming far from the truth that [COVID-19] spread widely in Egypt, the state’s inability to confront it,” and “sarcasm on the measures the state is taking to combat the virus with the aim of raising public angry opinion.”

Ludicrously, the spread of the virus may be further exacerbated in Egypt not just because the government has made reporting information about the disease a crime, but also because it released silly public health guidelines encouraging people to “drink more orange juice” and “eat honey” to strengthen their immune systems. Sarcasm is the only appropriate response to guidelines likes these.

Egypt’s ruler came to power by attacking freedom of expression and silencing those who questioned him. Is it any surprise that he has crafted a regime with instincts to suppress information suggesting he’s anything but perfect?

In Hungary, strongman Viktor Orban is now working the coronavirus into his regular xenophobic schtick, claiming that his government observes, “a certain link between coronavirus and illegal migrants." No such link has been found by medical experts, but that hasn’t stopped Orban from using it as pretext to enact the migrant restrictions and asylum bans that he has long advocated.

Authoritarian leaders are constantly searching for scapegoats, working to rile up the fears of their populace, and trying to tighten their grips. To them, the coronavirus pandemic is a bonanza—the liberal democracies that would typically call them out for their violence, repression, and racism are distracted, with the necessities of stopping the virus in their home countries. If these strongmen go unchecked, the COVID crisis may end with all of us emerging to find a world in which authoritarianism triumphs. More political prisoners, more presidents-for-life, and more despotism. Now, the West needs to figure out how to stop a pandemic and fight authoritarianism at the same time. It can be done.