Why the B-1 Become May Become a Hypersonic Missile Carrier 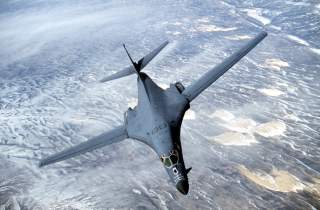 The B-1 bomber’s future may be hypersonic.

The U.S. Air Force is considering whether to modify the Lancer to mount hypersonic missiles. The idea is to expand the weapons capacity of the B-1, a 1970s swing-wing, supersonic bomber that once carried nuclear weapons during the Cold War and is now a bomb truck for conventional smart bombs. The aircraft has been long plagued by maintenance woes that as of June 2019, have left only a few of the Air Force’s 62 B-1Bs fit to fly.

The 412th Test Wing at Edwards Air Force, California, recently demonstrated how the aircraft could be modified with both a longer bomb bay and the ability to mount external weapons.

“The two potential programs – external carriage and long bay options – would allow the B-1B to carry weapons externally, significantly increasing its magazine capacity for munitions, as well as adding larger, heavier munitions, such as hypersonic weapons,” the Air Force said.

A forward bulkhead was moved to lengthen the Lancer’s intermediate bomb bay from 180 to 269 inches while carry external munitions on six of the aircraft’s eight hard points. “It increases the magazine capacity of the B-1B,” said Lt. Col. Dominic Ross, B-1B program element monitor at Air Force Global Strike Command. “Currently we can carry 24 weapons internally, now it can be increased to potentially 40 based on what type of pylon we would create. This gets the B-1 into the larger weapons, the 5,000-pounders. It gets it into the hypersonics game as well.”

Interestingly, a B-1B mockup showed a mock hypersonic missile attached to a Conventional Rotary Launcher The new CRL is a rotating mechanism carried in the bomb bay, which allows an aircraft to carry more munitions. It is already being fitted to the B-52.

If the Air Force goes ahead with the modifications, they would “basically increase the weapons capacity to make the bomber more efficient, so that we’re able to strike more targets with the same aircraft,” said Col. Richard Barksdale, commander of the 28th Operations Group at Ellsworth Air Force Base in South Dakota, the unit that flies the B-1s. “It would allow us to more efficiently plan for targeting and use fewer aircraft with fewer aircrews in harm’s way to strike the same number of targets. It would also decrease the support required, whether that’s tankers or other support assets.”

Significantly, the Air Force took care to note that a modified B-1B would still only be capable of carrying conventional weapons as per the New Strategic Arms Reduction Treaty, or New START.  Arms treaties between the U.S. and Russia mandated that the B-1 be stripped of its original capability to carry nuclear weapons. Instead, the Lancer – which can currently carry 38 tons of bombs – has been used to drop conventional weapons over Afghanistan and Iraq.

An ability to carry more weapons – especially the Mach 5-plus hypersonic missiles now frantically being developed by the Pentagon to catch up with Russian weapons – might give the troubled B-1 a new lease on life. But Mark Gunzinger, a former B-52 pilot who is now an analyst at the Center for Strategic and Budgetary Assessment thinktank, believes a modified B-1 will help tide over the U.S. bomber force until the next-generation B-21 enters service in the mid-2020s.

“The mods would enable B-1s to carry hypersonic weapons of a certain size internally,” Gunzinger told the National Interest.   They also have the potential to carry them externally. I think this is a great reason to keep B-1s in service until 100 or more B-21s join the operational force.”

Gunzinger would like to see both the B-52 and B-1 modified to carry hypersonic missiles. “B-52s also have the capacity to carry weapons internally and externally, of course.  Both bombers would make great hypersonic weapons carriers.  Frankly, given the small size of the current bomber force, I am an advocate of keeping both.  The Air Force needs the stand-off strike capacity, and other options, such as procuring a new large standoff weapons carrier—commercial derivative or otherwise—would likely be far more expensive.”