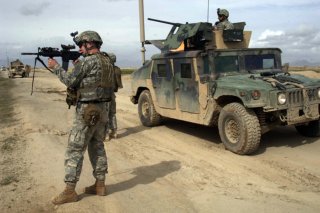 On the April 6, 2021, edition of Victor Davis Hanson’s podcast, the scholar observed that President Joe Biden seems oblivious to when he has been handed an easy win. This observation is prescient considering Biden’s announcement last Wednesday the United States will blow through the original May 1 deadline to withdraw all troops from Afghanistan. The president has instead decided to begin the exit on May 1 and end the campaign by the twentieth anniversary of the event that started it all—September 11, 2021.

Of course, this is not necessarily bad news. It officially affirms that the Biden administration is committed to ending America’s second-longest war (Iraq is America’s “real” longest war) and the existence of a hard date means that the administration is willing to hold itself to task. This is especially critical given the tide appeared to be turning against a withdrawal from Afghanistan with Biden’s assumption of office.

Furthermore, the withdrawal is not “conditions-based,” a stipulation that has played a role in extending the conflict well past its “sell-by” date. Biden, who supported withdrawal during the Obama administration, not only made his decision against the objections of advisers and military leadership but spoke as realistically about the situation as any U.S. official has in twenty years. As countless analysts and commentators have breathlessly argued for decades, the conditions will never be to America’s satisfaction. At this point, the difference between leaving in May versus September is time. And casualties.

Which begs the question—why prolong our involvement? And why by four months?

The Trump administration had negotiated, with the Taliban, a withdrawal date of May 1 on February 29, 2020. This was after Donald Trump, by his own admission, betrayed his instincts, re-escalated U.S. involvement in the country, and ordered three years of the fiercest aerial bombing seen during the entire war. It was hard-fought and long overdue, but the United States now had a pathway out of the war, a point alluded to by Biden in his announcement. Fourteen months was more than enough time to withdraw the remainder of the mission and their equipment—by January 2021, the troop count had dropped from 14,000 when the agreement was signed to 2,500.

There is no reason to believe that the Biden administration could not have removed 2,500 troops by May 1. “I was asked by the White House to draft an order for the president that would disengage our forces from Afghanistan,” said retired Army colonel Douglas Macgregor in an email interview. “Based on discussions with subject matter experts, I recommended a timeframe between November 12 and December 31 to remove all remaining uniformed military personnel from Afghanistan. That was more than enough time,” Macgregor, now a senior fellow at The American Conservative, advised Acting Defense Secretary Chris Miller during the final few months of the Trump administration.

Some have noted that extending the leave-by date to September makes an Afghanistan withdrawal more logistically feasible. But this only raises questions as to what the Pentagon was up to for fourteen months. Furthermore, the logistical challenges, while formidable, may not be as imposing as Biden claimed just a few weeks ago.

“The bases will be turned over to Afghan military and security forces,” explained Macgregor. Sensitive equipment can be removed and flown out. The equipment that cannot be flown out will have to drive out through Pakistan. Special operations and, if needed, contract security elements can be on hand to secure the withdrawal.”

If one-and-a-half months were more than enough time to withdraw the several thousand remaining troops and their equipment at the end of 2020, it seems curious the Biden administration could not make it happen in roughly three-and-a-half months. It seems the decisive factor may have been willpower—Biden, by his own admission, did not want to. But why?

Things are never what they seem in Washington, but Biden’s decision to delay U.S. withdrawal at least comports with Victor Hanson’s critique of the president’s overall style as “illogical.” Rather than take the easy way out and exploit the window of opportunity afforded by his predecessor, Biden has apparently decided to take ownership of the war. In delaying withdrawal, the president may be attempting to sever the decision from Trump and give himself a major political win he could solely take credit for. Combined with the symbolic value of 9/11’s twentieth anniversary, there is no question this would come in handy in 2024 beyond merely saying the Afghan war ended on his watch. Again, its illogic is belied by the fact it is in line with how he has handled other issues thus far—instead of accepting a relatively tranquil situation at the southern border, a self-induced crisis instead emerged, one Biden simultaneously denies and blames on Trump.

Even President Barack Obama had the good sense to stick with the plan signed off by George W. Bush in 2008, which resulted in U.S. forces departing Iraq in December 2011. Though Obama negated this accomplishment by redeploying U.S. forces to Iraq in 2014, the withdrawal, for a time, served as a boon to his presidency, and was viewed as a campaign promise kept. Obama recognized his predecessor had made life simple for him and took the easy win.

Not so with Biden.

The significance of this goes beyond politics. Staying longer also means time for more U.S. soldiers to die and for America’s involvement to continue, given that the Afghan government would prefer the United States remain. This is where Biden may come to regret a winner-take-all approach—if unforeseen events between now and then make an exit politically costly, potentially leading troops to stay in-country past 9/11/21, Afghanistan will undoubtedly become “Biden’s War,” just as it was Trump’s, Obama’s, and Bush’s.

Painful as it may be to admit, it is Trump’s negotiations that made a withdrawal possible. It is highly unlikely American forces would be heading home in 2021 under either president if not for last year’s agreement. While Biden certainly does not want to ride the coattails of his predecessor, if only out of spite, playing with the lives of American soldiers by extending the war seems callous, since leaving in May or September would make no difference concerning the destiny of Afghanistan.

“Whatever we created in that country will collapse,” said Macgregor. “What people do not build themselves does not survive the withdrawal of foreign influence, especially foreign military power.” Even State Department officials concede the United States will likely need to abandon its embassy in Kabul in the next few years. The reality of what lies ahead for a post-U.S. Afghanistan is sobering, but, if the ending is the same either way, is delaying the inevitable worth whatever benefit Biden will receive?

Still, it should be hoped Biden remains true to his word. If not September, then when? Likewise, proponents of Biden’s approach should take a breath and remember—it ain’t over ‘til it’s over. In 1975, 161 U.S. troops died in Vietnam, despite a full diplomatic/military withdrawal by April 30. 161 dead in four months. Biden has extended our stay in Afghanistan four months.

Most certain is this—when the end finally comes, the questions on everyone’s lips will be: “That’s all? What took so long?”