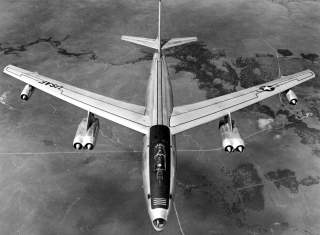 The Boeing B-47 Stratojet represented a milestone in aviation history and a revolution in aircraft design. In fact it incorporated many advanced features for the time, including swept wings, jet engines in underwing pods, fuselage-mounted main landing gear and automated systems that reduced the standard crew size to three.

Every large jet aircraft today is a descendant of the B-47.

Thanks to all these features the Stratojet became an essential component of the U.S. Air Force’s Strategic Air Command (SAC) during the 1950s and early 1960s, both as a nuclear bomber and a reconnaissance aircraft.

Noteworthy while it could carry about the same bomb tonnage as the aircraft it replaced, the B-47’s top speed was more than 200 mph faster. Since the B-47 did not have the range of SAC’s heavy bombers (the B-36 and later the B-52), Stratojet units regularly deployed to forward air bases around the world on temporary duty.

Initially these deployments lasted three months, but beginning in 1957 under the Reflex Action program, they were shortened to three weeks.

In addition to its role as a nuclear strike bomber, the Stratojet’s speed and payload made it a useful strategic reconnaissance aircraft. Between 1952 and 1956, photographic reconnaissance B-47s conducted several overflights of the Soviet Union, providing detailed pictures of Soviet military and industrial facilities. Stratojets gathered intelligence about Soviet air defense systems and the Soviet intercontinental ballistic missile program. Weather reconnaissance versions of the B-47 not only collected weather data, but also took air samples of Soviet nuclear detonations. These essential RB-47 missions over and along the border of the Soviet Union were hazardous, and Soviet fighters damaged one reconnaissance Stratojet and shot down two, with the loss of seven USAF personnel killed and two temporarily imprisoned.

According to Robert Robbins, B-47 test pilot, “the best way to tell about the performance of the Stratojet was to say that any good crew could have flown it. It took no unusual ability or education. […] Rather, the credit should go to the men who carried out these visions on the drafting boards and the factory workers who made the visions a reality.”