Why Is Border Patrol Chief Carla Provost Stepping Down? 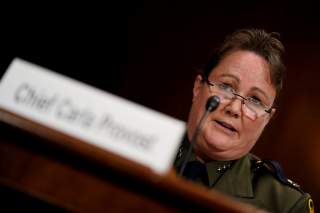 Border Patrol Chief Carla Provost will step down by the end of January, two senior officials — one with the Department of Homeland Security official and one with Customs and Border Protection — confirmed to the Daily Caller News Foundation.

The Washington Examiner was the first to report of Provost’s forthcoming departure.

It’s not immediately clear when exactly Provost will leave, but she is expected to be out by the end of January at the latest. She has held her position for nearly all of President Donald Trump’s tenure.

CBP did not respond to a request for comment from the DCNF, but several people with knowledge of the situation confirmed that she is departing.

Unlike other immigration-enforcement agencies during the Trump administration, Border Patrol has enjoyed steady leadership with Provost. Trump first tapped her as acting Border Patrol chief in April 2017 — only four months into his presidency. She served in that position until she was eventually promoted to a permanent capacity.

The nearly three-year tenure is a far cry from other DHS agency leaders. Former DHS acting Secretary Kevin McAleenan, for example, only served in his position for roughly six months before stepping down in November.

Mark Morgan, the current acting commissioner of CBP, is roughly six moths into his position, having served as acting director of Immigration and Customs Enforcement (ICE) before being shifted to his his current position in July.

During her tenure, Provost testified before Congress numerous times, asking lawmakers to do more to help the humanitarian and security crisis taking place at the southern border. She is widely known Border Patrol’s first female chief.

The leadership change, if it goes over as expected, will mark another promotion for Scott. The longtime Border Patrol official was named the chief patrol agent for the San Diego sector in late 2017, and he was recently tapped as the deputy chief of Border Patrol.