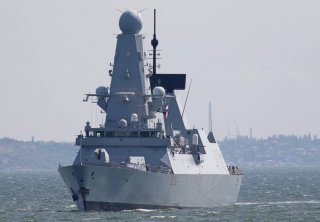 The Pacific Ocean, the largest body of water in the world, is known for its vastness, but it might seem a little more crowded soon. The head of the British Royal Navy announced that the United Kingdom’s senior service will maintain a persistent presence in the ocean. Speaking Wednesday at the Center for Strategic and International Studies (CSIS), First Sea Lord and Chief of the Naval Staff Adm. Ben Key said that the Royal Navy would return to its historic persistent presence in the Indo-Pacific, while also filling its role as the foremost navy in Europe.

The Royal Navy will operate with partners and build “more profound relationships” in the region to counter aggression and bullying from Beijing, and the People’s Liberation Army Navy (PLAN), which has increasingly treated the South China Sea as its private lake.

Key explained that the Royal Navy “will be listening humbly” to its regional partners and allies.

“After all it’s their waters,” Key noted, but also stressed that the Royal Navy has maintained a presence in the Indo-Pacific since the days of Captain James Cook’s explorations in the eighteenth century, and highlighted how the bulk of world trade now flows through the region in the twenty-first century.

Key also explained how the Royal Navy will employ its new class of aircraft carriers to maintain its persistent presence in the region. While the PLAN now operates two carriers and is currently constructing two additional flattops, Key laid out why the Royal Navy’s capabilities shouldn’t be underestimated.

“To sort of quote Churchill, the end of a beginning for us in rediscovering the Royal Navy’s big deck carrier aviation capability,” Key continued. “You know, I’m proud – very proud, as you mentioned, to have been the commanding officer of HMS Illustrious, one of the – you know, one of our last generation of aircraft carriers. But in comparison, Queen Elizabeth and her sister ship, Prince of Wales, are such are [sic] step up. The only aircraft carriers in the world designed specifically to support fifth generation combat air. And what this deployment last year was the realization of was that journey to bring them into service and to prove those capabilities.”

Beyond the obligation to address Beijing’s aggression in the Indo-Pacific, Key also reaffirmed that the Royal Navy will remain committed to addressing potential threats from Moscow.

“There’s something quite interesting to observe in what the Russian investment in their own fleet over the last 15 years has done for them,” Key added but stressed that the Royal Navy wasn’t looking to control the world’s waterways but rather to maintain freedom of navigation for all nations.

“The high seas are, by their very nature, you know, they’re open to everybody,” Key stated. “And so this is not about denying them freedom of maneuver, unless it’s the sort of thing where they’re seeking to deny us,” he continued. “But if people want to constrain our ability to do that, to threaten our national security, to imply in the underwater space around the United Kingdom, where, you know, some of our own critical national infrastructure is being pursued by Russia, then we need to be able to respond to that and say: Actually, we have a right to do this. We have a right to look after what is going on in our own waters. We have a – we have right to protect ourselves and to push back against it.”

Given Key’s remarks, one need only remember the message the Board of the Admiralty sent out to the fleet at the outbreak of World War II: “Winston is Back.” Now, the message could read instead, “The Royal Navy is back!”