Why Canada Buying Old Australian F-18s Is A Bad Idea 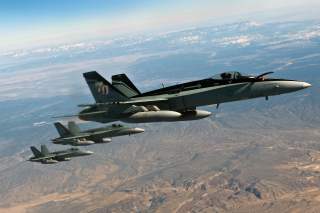 With its own CF-18s—the Canadian version of the U.S. F/A-18 Hornet—becoming too old to fly, and mired for years in a politically-charged search for a new fighter jet, Canada has turned to the aviation second-hand store. It is buying twenty-five used Royal Australian Air Force F/A-18s, of which eighteen will be used for operations while the other seven will be used for testing and spare parts. The planes will supplement the existing CF-18 fleet.

The eighteen operational Australian aircraft will probably include twelve single-seat “A” models, as well as six two-seat “B” models that will be used for training. But “final mix will be dependent on a number of considerations, including the condition and availability of aircraft,” the Canadian Department of National Defense told the Ottawa Citizen. The first two aircraft should arrive in Canada in spring 2019.

“The exact cost of the aircraft, along with weapons and other equipment, is not yet known as negotiations are still underway, Procurement Minister Carla Qualtrough recently told journalists,” according to the National Post. “The Liberal government has set aside up to $500 million for the project and that would cover the seven added jets.”

The Australian Hornets will receive Canadian software, ejection seats and lighting. “Ultimately the intent is the 18 aircraft are indistinguishable from our 76 aircraft,” said Pat Finn, assistant deputy minister for materiel at the Department of National Defense.

But similarities between the Australian and Canadian Hornets could be part of the problem. Canada’s CF-18s date back to the early 1980s, while Australia’s were built in the mid-1980s. Both nations have upgraded these aircraft over the years. But the difference between them is not “new” and “old,” but “old” and “older.”

Which still leaves Canada back at question number one: what will be Canada’s new fighter jet? While kangaroos and caribou don’t share much in common, Australia and Canada do share something: messy jet fighter procurement.

Australia’s embrace of the F/A-18 dates back to the late 1960s, when it sought to replace its French-designed Mirage III fighters. After considering several aircraft throughout the 1970s, including the F-16, F-15 (rejected because it was deemed overkill for Australia’s needs) and the F-18L (a specifically land-based version of the F/A-18, which originated as a U.S. Navy carrier jet), by 1980, the Royal Australian Air Force had settled on the F/A-18, whose twin engines and rugged design (for operating from aircraft carriers) made it ideal for the long distances and desolate terrain of Australia.

But by the early 2000s, the RAAF’s F/A-18s were aging, its 1960s American-made F-111s (infamous for its development woes) were set to be retired in 2010, and the F-35 development was being pushed back (the RAAF only received the first two in December 2018). So, Australia opted for a stopgap: twenty-four F-18E/F Super Hornets.

Substitute Arctic tundra for Australian desert and it is no surprise that engine redundancy and airframe ruggedness recommended the CF-18 to the Canadians, who ultimately bought 143 of the Hornets. But Canada’s current fighter search makes Australia’s look smooth. Canada was going to buy the F-35, then balked. Then it was going to buy F/A-18 E/F Super Hornets, but changed its mind in retaliation for the Trump administration’s tariffs on Canadian aircraft manufacturers. Last year, the government released a draft tender for an eighty-eight-jet, US$20 billion buy, with the contenders narrowed to the Eurofighter Typhoon, Sweden’s Gripen, the Super Hornet and the F-35.

The new fighter is supposed to be fielded by 2025, though skeptics could be forgiven their doubts. In the meantime, the Royal Canadian Air Force will carry on with old Cold War F/A-18s—theirs and Australia’s.