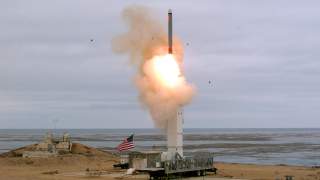 (Washington, D.C.) The Pentagon has shot off a developing land-fired cruise missile in a successful test of an emerging land-fired variant of a Tomahawk missile able to hit long-range targets from safer distances and potentially complement Air Force and Army medium-range weapons now under development,

“The test missile exited its ground mobile launcher and accurately impacted its target after more than 500 kilometers of flight. Data collected and lessons learned from this test will inform the Department of Defense's development of future intermediate-range capabilities,” an Aug. 19 DoD statement said. The flight test was of a conventionally-configured ground-launched cruise missile at San Nicolas Island, California, the Pentagon added.

The Pentagon’s emerging land-fired variant of a Tomahawk cruise missile could further fortify the strategic attack mission envelope introduced by new Army and Air Force weapons -- such as the Army Long Range Precision Fires and Air Force Long-Range Stand-Off weapon -- designed to enable offensive attack in well-defended areas presenting great danger in the event of close-in contact. Much like the recently shot-off Pentagon cruise missile, LRPF and LRSO give Commanders a wider range of options than most conventional weapons, such as hitting enemy air defenses, installations, command and control centers and other high-value targets. For instance, there may be instances in which enemy air defenses make it difficult for U.S. planes to operate overhead, or various combat conditions precluding maritime Tomahawks from firing from Navy ships or submarines.

Pentagon officials are discussing the success of the test and beginning to explore ways to build upon its promise.

“We will take all the data they are gathering and fold that information into any future weapons evaluations we are going to be doing,” Pentagon spokesman Lt. Col. Robert Carver, told Warrior.

Carver added that data evaluations will look at results such as precision targeting, trajectory and damage impact, among other things.

A 500km land-fired cruise missile brings a number of substantial implications, the first and foremost of which is introducing a counter weapon, or deterrent, to Russia’s well-documented testing of medium-range land-fired missiles in violation of the INF treaty. The test, therefore, marks the first time the U.S. has fired a weapon of this range since stepping back from the INF treaty. More specifically, Russian testing of medium-range land-fired cruise missiles have presented a substantial threat to NATO and U.S.-allied Eastern European countries.

This new weapon could open up offensive attack nuances, for instance, should there be a need to attack Russian force concentrations massing in Eastern Europe and launching attacks, a land-based cruise missile would offer advantageous strike possibilities.

This land-fired Tomahawk variant aligns with and complements several other weapons systems now being tested and developed, the Army’s now-in-development Long Range Precision Fires (LRPF) and the Air Force’s air-launched cruise missile called the Long-Range Stand-Off weapon. Much like the recently shot-off Pentagon cruise missile, LRPF and LRSO give Commanders a wider range of options than most conventional weapons, such as hitting enemy air defenses, installations, command and control centers and other high-value targets.

Interestingly, the effort parallels several current air and ground weapons initiatives aimed at introducing longer-range fires for the U.S. military. The Army’s LRPF weapons development program, now being prototyped and heavily emphasized as a priority for the former Army Secretary Esper (current SecDef), will be shot off by next year. While a rocket and not a cruise missile, likely relying upon different kinds of propulsion and flight trajectory, the LRPF does seem to complement the emergence of a medium-range cruise missile. If offers what might be called an in-between possibility wherein long-range ballistic missiles might not be necessary, yet targets are sufficiently out of range for artillery or other land-fired rockets.

Similar to the emerging Pentagon cruise missile test, the LRFP is planned to fire at ranges out to 500km.

The emerging LRPF, slated to be operational by 2027, draws upon next-generation guidance technology and weapons construction as part of an effort to engineer a sleek, high-speed, first-of-its-kind long-range ground launched attack missile able to pinpoint and destroy enemy bunkers, helicopter staging areas, troop concentrations and other fixed-location targets from as much as three times the range of existing weapons, service officials said.

Long-range surface-to-surface fires, many contend, could likely be of great significance against an adversary such as Russia - a country known to possess among the most advanced air defenses in the world. Such a scenario might make it difficult for the US to quickly establish the kind of air supremacy needed to launch sufficient air attacks. As a result, it is conceivable that LRPF could provide strategically vital stand-off attack options for Commanders moving to advance on enemy terrain.

In addition, there may also be some instances where a long-range cruise missile - such as a submarine or ship-fired Tomahawk - may not be available; in this instance, LRPF could fill a potential tactical gap in attack plans.

Raytheon and Lockheed are both working on prototypes of the weapons; the new weapon is designed to replace the Army’s current aging 1980’s era MGM-140 Army Tactical Missile System, a ground-launched missile able to fire at least 160km.

LRPF missile will have a newer explosive warhead and guidance technology aimed at providing an all-weather, 24/7, precision surface-to-surface deep-strike capability, an Army weapons developer told Warrior in a previous discussion.

“The LRPF will replace the Army Tactical Missile System (ATACMS) capability, which is impacted by the age of the ATACMS inventory and the cluster munition policy that removes all M39 and M39A1 ATACMS from the inventory after 2018,” the official added.

As of last year, Lockheed statements on their weapons stated that their emerging prototype missile system includes a Launch Pod Missile Container and a fully-integrated surface-to-surface guided missile that will be compatible with the Multiple Launch Rocket System MLRS M270A1 and M142 High Mobility Artillery Rocket System HIMARS launchers.

Longer-term, the Army is beginning to explore the use of a "dual-pulse" motor for the LRPF; one motor brings the weapon along a certain trajectory to then be replaced by another motor better suited to propel the missile through higher altitudes with lighter air.

As part of a concurrent effort, the Army is also now upgrading ATACMs with new guidance technology and a proximity fuse to fill the near term weapons gap until LRPF arrives.

The U.S. Army was among the first ever to deploy land-fired precision weaponry such as the GPS-guided Excalibur precision 155m artillery round and the longer-range Guided Multiple Launch Rocket System, or GMLRS. These weapons, which were first used in combat in Iraq and Afghanistan in the 2006 through 2009 timeframe, ushered in the advent of a new kind of weapon engineered to give Commanders more attack options and pinpoint enemy targets with great precision from long distances. In fact, among other things, GMLRS successfully destroyed Taliban targets in Afghanistan.

While Excalibur and GMLRS are engineered to hit 30 km and 70 km respectively, they did bring a substantially new precision land attack option to Army Commanders who previously relied upon “dumber” artillery and rockets principly used as “area-fire” weapons enabling troops to maneuver.

While precision fires of this kind would, quite naturally, be useful in full-scale mechanized force-on-force combat – they proved particularly useful in counterinsurgency attacks as Taliban and Iraqi insurgents deliberately blended-in with innocent civilians among local populations. As a result, precision attacks became necessary, even vital, to U.S. combat success.

As an air-launched equivalent, the Air Force has been working with industry on prototyping and design work on the emerging Long Range Stand-Off weapon nuclear-armed cruise missile, set to enter into a new phase of construction by 2022, service officials said. While this weapon will be armed with nuclear weapons for large-scale strategic deterrence purposes, it is also being built with a conventional attack possibility.

Interestingly, while the LRSO is listed as having the technical capacity to hit ranges out to 1,500 miles, it also of course can function as a medium-range weapon in the vicinity of 500 km as well.

Raytheon and Lockheed, are now working on a $900 million Technology Maturation and Risk Reduction deal for the LRSO.

Due to emerging nuclear and conventional weapons threats, the Air Force now envisions an operational LRSO by the end of the 2020s - as opposed to prior thoughts that it may not be ready until the 2030s.

Air Force officials tell Warrior Maven that plans to move into the Engineering and Manufacturing Development phase are on track for 2022.