Why Is China Blaming America for Spreading 'Panic' Over the Coronavirus? 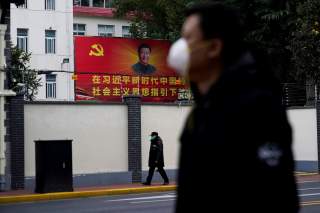 As coronavirus cases and deaths spike in China, the regime in Beijing is looking for a devil to blame.

The U.S. has “unceasingly manufactured and spread panic,” Chinese Foreign Ministry spokeswoman Hua Chunying said at the beginning of this month about the coronavirus epidemic, which has now spread to much of China.​

In the same vein, the Global Times, a Communist Party-controlled tabloid, has accused the U.S. of “immoral” conduct and repeatedly claimed the West’s response to the disease is stained by “racism” and a “ ‘yellow peril’ mythology.” The paper also said, referring to the H1N1 outbreak in 2009, that “the U.S. failed to adopt effective control measures, causing a worldwide spread of the virus.” In fact, the U.S. response to the virus, which first appeared in Mexico, was generally considered both swift and effective.

The Foreign Ministry's Hua early this month also accused the U.S. of not offering “any substantial assistance,” when in reality China had at that time rejected all American offers for almost a month. Within hours of Hua's comments, Hu Xijin, editor of the Global Times, was mocking President Donald Trump, accusing him on Twitter of talking about providing aid but not actually doing so. Yet at the time these charges were made, the Trump administration was in fact loading a 747 with biohazard protection gear and medical and humanitarian relief supplies for China.

China’s leaders are attacking the U.S. to divert attention from their own mishandling of the crisis. They allowed the disease to spread during its early stages, and now they are making up for lost time by imposing draconian controls. Social cohesion in epidemic areas is beginning to dissolve as unpopular measures meet resistance. There have been, for instance, images of workers in biohazard gear patrolling Wuhan with automatic rifles and pistols. The Communist Party’s suppression of information and attempts to propagate its own narratives have led, inevitably, to the fast spread of rumors, especially those relating to the origin of the disease.

Xi Jinping late last month took credit for Beijing’s epidemic-fighting efforts. But as failures have become evident, he has since been subtly shifting responsibility to others. Late January, he formed a coronavirus task force but, unlike other Communist Party bodies of this sort, did not take a role, leaving the chairmanship to his political adversary, Premier Li Keqiang, in an apparent move to create a fall guy.

Now Xi maintains everyone is on trial. This month he said: “The outbreak is a major test of China’s system and capacity for governance, and we must sum up the experience and draw a lesson from it.”

Chinese leaders, as Henry Kissinger reminds us, use lessons from Chinese history to inform current policy. Mr. Xi, therefore, must have two Wuhan events on his mind these days. First, the revolution that ended two millennia of imperial rule began in that city in October 1911. Second, an estimated 10,000 residents poured out into Wuhan streets in the first large-scale, Hong Kong-inspired demonstration in the mainland, in early July.

The February 7 death of Li Wenliang, the Wuhan doctor who tried to warn the country of coronavirus, triggered an outpouring of grief and a firestorm of criticism across that city and throughout China's social media platforms. Upset Chinese, following protesters in Hong Kong, have responded by adopting as their anthem "Do You Hear the People Sing?" The Chinese people now are publicly saying, through song and more direct means, that the real disease in their country is communist rule.

China's communist rulers, therefore, need scapegoats. At a time when China needs help fighting off the coronavirus, it is targeting the one country that can provide the most assistance. That, many will say, is a sin. “Xi Jinping can end the disease or control the narrative,” China historian Arthur Waldron of the University of Pennsylvania told me last month. “He cannot do both at the same time.”

Beijing’s attacks on the U.S. make it clear Xi has chosen the wrong path, and because of that so many will now needlessly suffer.