Why China Will Have a Say in Any Future Korean Reunification 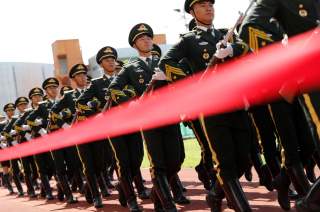 Key point: Beijing is the biggest spoiler in any Korean reunification. If China wanted to, it could certainly dictate some of the terms.

In 648, Silla (present day Southeast of South Korea) formed an alliance with Tang China to begin its conquest of the Korean Peninsula after years of stalemate with Baekje (present day Southwest in South Korea) and Goguryeo (present day North Korea and Manchuria). The Tang-Silla alliance shifted the balance of power decisively in Silla’s favor, which allowed it to conquer Baekje in 660 and Goguryeo in 668. Initially much weaker than its rival Goguryeo, Silla understood that it could only defeat its enemy if it could enlist the help of Tang China, who would put pressure on the Tang-Goguryeo border while Silla would push northward to encircle the adversary. This strategy was highly effective, and Silla’s successful quest for Korean reunification resulted in the first united Korean national identity and the dominance of Unified Silla over the next 250 years on the peninsula.

The history of Korean reunification as well as its division after World War II underlines the important role that China has long assumed in Korean affairs. Had Tang China not participated in Silla’s quest for unification, Korea would have been still divided after 668; and if Mao had not decided to send the People’s Volunteer Army to thwart allied offenses, then South Korea would have succeeded in absorbing North Korea since 1950. The key point here is that China holds a veto over Korean reunification, and any future South Korean administrations will have to heed China’s interests if Seoul ever seeks to annex the territory under Pyongyang’s control.

At the moment, South Korea and Washington are ignoring this most important step for the eventual denuclearization and reunification of the Korean Peninsula. So far, there have been many articles on Chinese interests in Korea; nevertheless, analysts have not reached a consensus over the issue of how Seoul and Washington should deliver China’s demands both pre- and post-unification. This lack of certainty in policymaking has made China reluctant to fully enforce United Nations sanctions on North Korea and pushes Beijing to look to Moscow as an essential partner in solving the Pyongyang issue rather than Washington or Seoul.

If the two allies want to break the stalemate on the peninsula, South Korean and American policymakers may start not with what they can give to Pyongyang to persuade it to give up its nuclear weapons, but with what they can offer China to guarantee Chinese cooperation during future contingencies between North and South Korea. South Korea and the United States had better take a page out of Silla’s playbook and respect China’s concerns as well as collaborate with it over a common cause because that is the most viable way to achieve the denuclearization of North Korea and eventual Korean unification on South Korean terms.

China will not follow American and South Korean agenda easily; thus, Seoul and Washington must engage in confidence-building measures with Beijing. These measures can include increasing China’s stake in the current regional order by accepting China’s dual suspension proposal. This move will not only provide the necessary context to jump-start the moribund six-party talks, but it will also raise the cost of future North Korean nuclear and missile tests in Beijing, which forces China to impose stronger punishment on North Korea than it did in the past. Throughout the series of negotiations, all parties can seek to broker a deal between Washington and Pyongyang, in which the former will not seek regime change in return for the latter’s freeze on the future testing of nuclear weapons. This negotiating channel will dampen the tension and miscalculation between Pyongyang and Washington as well as leave open the possibility of an Iran deal-style agreement between Washington and Pyongyang.

Secondly, South Korea and America can drive a bigger wedge between China and North Korea by assuring China of its interests in a post-North Korea future. This can consist of not stationing American military north of the thirty-eighth parallel, permitting Chinese troops to help the South Korean army stabilize northern Korea and providing shelters for North Korean refugees. Additionally, the two countries might offer China the opportunity to overlook the demobilization and disarmament of the North Korean armed forces, they could honor economic agreements signed between Chinese companies and Pyongyang, or they could give China’s special rights for future investments in northern Korea. It is crucial to convey to China that it has more to gain from doing business with a united prosperous Korea than from living with nuclear-armed North Korea on its doorstep. Furthermore, the underlying point is that South Korea cannot regard Korean reunification as mere Korean domestic affairs; instead, it must listen to China’s concerns and recognize Beijing’s vested interests in the new regional order.

After Silla finished its quest for unification, it fought a bloody war against Tang China, who was attempting to establish its control over the territory gained during the war. Silla emerged victorious; however, its unification was not complete since Tang was able to hold on the northern territory of the fallen Goguryeo. In the end, Silla had to pursue a warm relationship with the Chinese so as to avoid another war on the peninsula. If the past offers any guides to Seoul, it is that prior coordination with Beijing over reunification-related issues, including Chinese interests in a post-North Korea scenario, is essential to future Korean security and territorial integrity. Whether Silla’s history is to be repeated or not is in the hands of South Korean and American policymakers.

Khang Vu is a graduate student at Dartmouth College. His other writings have appeared on The Diplomat and East Asia Forum. This first appeared in 2017 and is being reposted due to reader interest.