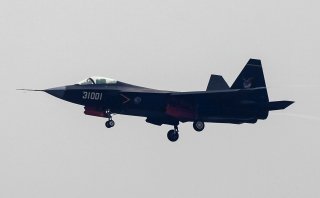 These are just a few of the highlights in the Department of Defense’s 2021 report on Military and Security Developments involving the People’s Republic of China.

Much attention continues to be paid to China’s navy, space capabilities, computing, and hypersonics. This may make it easy to overlook details in the report on airpower and the People’s Liberation Army Air Force. Many have heard of China’s fast-emerging fifth-generation stealth fighter fleet, drones, and H-20 bomber aircraft. But just how does the PLAAF compare to other air forces?

The Chinese Air Force is now the third-largest in the world and the largest in the Pacific region.  The report also states that China operates roughly 2,250 combat aircraft. Globalfirepower.com’s 2021 assessment states the country operates more than 1,200 fighter aircraft. The lack of overwhelming numbers of air assets, particularly fifth-generation planes, may explain why China continues to place such an enormous emphasis on naval domination.

The Chengdu J-20, for instance, may or may not be able to rival an American F-22 Raptor or F-35 Lightning II. China reportedly operates about fifty J-20s, whereas the United States flies 160 F-22s and plans a large F-35 fleet of 1,763 aircraft. Given this, it might be difficult for China to establish air supremacy in a major engagement with the United States unless it only operates in the Pacific and the United States cannot forward-position enough fifth-generation assets.

Perhaps with this in mind, the U.S. Air Force is continuing to explore new avenues for aircraft based in the Pacific theater. The U.S. position in the region will also be improved by Japan’s multi-billion dollar F-35 acquisition. If the United States succeeds in basing large numbers of fifth-generation fighters in locations such as Japan or South Korea, it could outmatch China in the air in the Pacific.

China’s force-size deficit when compared with the United States might lead some to prematurely dismiss the seriousness of China’s expanding air force as a major power global threat. But the pace of global technological change and China’s emphasis upon scientific innovation will prevent analysts from underestimating the Chinese air threat. Future conflict is widely expected to be characterized by combined air-sea-land operations, meaning the ability to project maritime power might help the Chinese military offset its number of fifth-generation stealth aircraft.

This air threat, the report points out, is compounded by the strengthening of China’s nuclear triad. China’s H-6N, its first, nuclear-capable bomber capable of air-to-air refueling, became operational in 2019. China is also known to be fast-tracking stealthy attack drones such as the GJ-11 and is progressing with its new H-20 stealth bomber. The FC-31 carrier-launched stealth fighter jet also remains in development.

What this equates to is that, even if China’s air force may not currently rival the United States in great power conflict, it can still impact warfare with smaller numbers of aircraft. Increasing sensor ranges, weapons guidance systems, stealth technology, and networking advances strengthen the likelihood that Chinese aircraft could still have a devastating impact in a conflict.

This would be particularly true in more limited attacks or in scenarios with quick strikes, such as conflicts in Taiwan or the South China Sea. Simply put, China might not need an overwhelming number of aircraft to take over Taiwan or annex small areas, but might be challenged to project substantial airpower beyond the Pacific on any kind of a large scale.